William Harrison “Bones” Dillard is an American former track and field athlete. He is the only male so far to win Olympic titles in both sprinting and hurdling events.

Dillard was born in Cleveland, Ohio, and attended East Technical High School. He was given the nickname “Bones” for his slender build while still in grade school. He was a successful athlete in college and served in the Ninety-Second Infantry (the Buffalo Soldiers) during World War II, where he distinguished himself in the service of his country.

At the trials for the 1948 Summer Olympics, Dillard failed to qualify for the 110-meter hurdles event; he qualified as third (and last) for the 100 m, as that particular feat was not his specialty. At the Olympic Games in London in 1948, Dillard edged teammate Barney Ewell for the gold medal, equaling the world record as well. As a member of the 4 x 100m relay team, he won a second gold medal. However, Dillard still wanted to win an Olympic hurdles championship.

Four years later, Dillard, then 29, got his chance in Helsinki, narrowly beating American Jack Davis. The usually-calm Dillard leaped for joy and exclaimed, “Good things come to those who wait.” Dillard won another gold medal in the relay, which brought his career total to four. 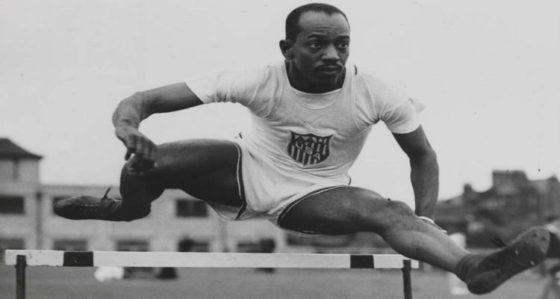