William Perry was the first known African American to work for Ford Motor Company. He started his position with at the Highland Park Plant in 1914. In the winter of 1888, Perry and Henry Ford worked together, sharing a two-man saw on Ford’s timberland estate. Henry Ford had hired Perry to help him cut and saw wood. Twenty-six years later, Perry visited Ford at the Highland Park Plant in search of employment.  Perry started working for the company as a janitor. Perry paved the way for other African Americans to be hired. However, during the early hiring process of many blacks, these individuals were  hired for the dirtiest jobs that no one else wanted.

Several years later Ford began placing African Americans in better positions, and even paying them higher wages. Beginning in the mid-1910s, the company began increasing the numbers of positions to African-American workers. The workers held jobs in virtually all non-salary job categories and earned the same pay as white workers.  Later, Ford even began introducing incentives to employees. He promised to pay a five-day work week of eight hours a day. Each employee would receive 5 dollars per day, even to African Americans. During those times the pay rate was considered extremely high. As word got out about the five-dollars per day many African Americans and European immigrants traveled to Detroit with hopes of finding work at Ford Motor Company. Many people applied for the jobs and Ford tried to hire almost every applicant. William Perry remained on the payroll at Ford Motor Company until his death on October 9, 1940 at the age of 87. African Americans were soon hired for supervisory and office positions later throughout the years. 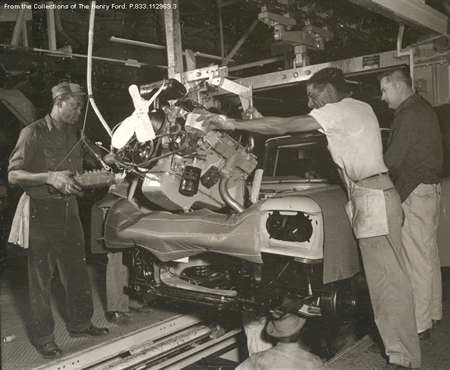