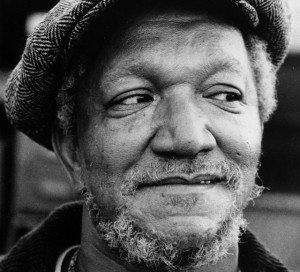 Notorious for his frank, tell-it-like-it-is style, Redd Foxx broke new ground for minorities and comedians alike. By joking about everything from sex to color barriers, he brought simmering and taboo issues into the open. His candor onstage not only jump-started what is now considered a war with censors, but also inspired and enabled other comedians to achieve more than had ever been possible. Foxx was not only “The King of Comedy,” but also a talented artist. He took a sketch book with him whenever possible, and enjoyed creating his own fantastic images or capturing the essense of those whom he loved or admired.

John Elroy Sanford was born into poverty in St. Louis on December 9, 1922. With a ruddy complexion, Redd became a fast nickname. He derived Foxx from admirable Major League Baseball player, Jimmie Foxx. He left St. Louis for Chicago when he was 13, and supported himself by playing the washboard in a band. When the band broke up three years later, he hopped a train to New York City. It was there that he met Malcolm Little, a man who would later be known as Malcolm X. In “The Autobiography of Malcolm X,” he is referred to as “Chicago Red, the funniest dishwasher on this earth.”

« Previous PostRemembering The Comedic Genius Flip Wilson -- Long Before Madea, This Man Made Dressing Up Like A Woman Funny Next Post »8 Successful and Thriving Black Communities Destroyed by Racist White Neighbors