Rags to Riches and Back to Rags: The Jesse Binga Story

Jesse Binga, one of ten children, was born in Detroit in the year 1865 to a barber and a serial entrepreneur. His mother’s entrepreneurial spirit became his inspiration throughout his life. As a housing developer, she built “Binga Row” houses in the city’s slums. Eventually, Binga dropped out of high school and apprenticed with his father as a barber. He also worked for a Detroit attorney before setting out to make his own mark in the world.

He headed to California and worked as a Pullman porter. In 1893, he arrived in Chicago to attend the World’s Fair. He didn’t have much money, but decided to stay in Chicago after the fair. He spent a few years working odd jobs before opening up his own real estate business.

He threw himself into his work and was quoted as saying, “Well, I’m going to give it a fair test, and if integrity counts for anything, I’ll win. I felt that only prejudice could beat me and I determined that if it did beat me I would go to South America and start life in one of those republics where a man’s color is not his crime.” 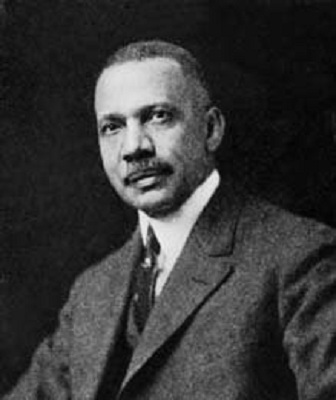 As a realtor, Binga would purchase run-down properties and repair, renovate, and maintain them himself. He was able to rent out his properties at a premium due to the influx of African-Americans from the south. In 1905, he took out a long-term lease on the Bates apartment building, which resulted the mass exodus of his all-white tenants, a practice which later became known as Blockbusting.

He eventually married Eudora Johnson, a relative of John “Mushmouth” Johnson, the city’s gambling kingpin. When John Johnson died in 1907, Eudora inherited $200,000. At the time, Binga was doing so well with his endeavors that he decided to open a business.

In 1908, Binga founded a private bank primarily for African-Americans, as other banks often excluded them. The bank was the first to be owned and run by an African-American in the north. Because of his bank, other black-owned businesses were able to establish themselves in the area as well.

When the Great Migration came, Binga grew ever more popular because he could provide a service to the black community, as they had previously been discriminated against. Binga was able to get a state charter for his bank and opened The Binga State Bank in 1921.

However, not everyone appreciated Binga’s ambition and impulsive personality. In 1929, the US stock market crashed, which launched the beginning of the Great Depression. Nevertheless, Binga continued to complete the construction on a luxurious $325,000 five-story office block, which had a roof-top ballroom, known as the Binga Arcade. Although he wanted to revitalize the area, that didn’t happen.

Binga had plans to open a new bank, but he was not able to get funding. He was later able to gain financial support, but Illinois state officials required additional payments of $400,000 in cash. Binga then turned to the Chicago Clearing House Association to cover this amount, since his bank was a member, but he was quickly denied. Despite having solid assets, Binga was unable to liquidate these immediately; the bank’s assets were too heavily invested in mortgage loans to black churches and fraternal societies, and many of these clients had become unable to make their payments. Binga refused to seize the properties, and in June, the Auditor General of the State of Illinois closed his bank. Binga lost everything, as well as many of the depositors.

Once the bank was closed, Binga was investigated and criminal charges followed. He was indicted in March 1931 for embezzlement, and was eventually sentenced to 10 years in prison. The ruling caused resentment within the community. Most people felt that racism was part of the bank’s failure. Clarence Darrow, Binga’s attorney, attempted to persuade a parole board hearing for his early release.

In 1933, Binga’s wife passed away. When he was released from prison, he was given a $15-a-week job working as a janitor. He spent the rest of his life in poverty. Binga always said he was innocent in the affair; in 1941, he was later pardoned by the state’s Gov. Dwight H. Green. Binga died on June 13, 1950.