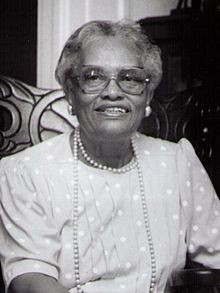 Dovey Johnson Roundtree is a civil rights activist, ordained minister, and attorney. She is noted for her 1955 victory before the Interstate Commerce Commission in the first bus desegregation case to be brought before the ICC resulted in the only explicit repudiation of the “separate but equal” doctrine in the field of interstate bus transportation by a court or federal administrative body.

Dovey Johnson Roundtree was born on April 17, 1914 in Charlotte, North Carolina. She was the second oldest of four daughters of James Eliot Johnson, a printer in the local offices of the African Methodist Episcopal Zion Church, and Lela Bryant Johnson, a seamstress and domestic. After her father’s death from the influenza epidemic of 1919, Roundtree along with her mother and sisters moved to live with her maternal grandmother, Rachel Bryant Graham, and her husband, the Rev. Clyde L. Graham, an AME Zion Church minister.

Roundtree first entered the civil rights arena in October 1945 in a nine-month postwar assignment with black labor leader A. Philip Randolph, who was staging a national campaign to make the wartime Fair Employment Practice Committee (FEPC) a permanent entity.

Roundtree later enrolled at Howard University School of Law in the fall of 1947, one of only five women in her class. From 1947 to 1950, she immersed herself in the assault on school segregation being mounted by Thurgood Marshall and Howard Law professors James Madison Nabrit, Jr. and George E.C. Hayes.

When Roundtree  entered Spelman College in 1959, she got involved in the Atlanta Student Movement after being inspired by the Greensboro North Carolina lunch counter sit-in. She participated in numerous sit-ins and was arrested a few times,  Roundtree regularly picketed and protested with her colleagues in a bid to integrate Atlanta.

During a time when African-American attorneys had to leave the courthouses to use the bathrooms, Roundtree didn’t hesitate taking on Washington’s white legal establishment and prevailed. She led the vanguard of women ordained to the ministry in the African Methodist Episcopal Church in 1961 and merged her law practice with her ministry to fight for families and children being destroyed by urban violence.