Fort Wagner and the 54th Massachusetts Volunteer Infantry: A Commemoration of the American Civil War

Fort Wagner, also known as the “Battery Wagner” was a beachhead fortification on Morris Island, South Carolina, that covered the Southern approach to Charleston Harbor. It was the site of two famous American Civil War battles in the campaign known as “Operations against the Defenses of Charleston” in 1863. It is considered one of the toughest beachhead defenses constructed by the Confederate army.

The First Battle of Fort Wagner, occurred on 11th July, 1863, and only 12 Confederate soldiers were killed, as opposed to 339 losses for the U.S. side. The Second Battle of Fort Wagner, a week later, is better known and its history can better be told. This was the U.S. attack on 18th July, 1863, led by the 54th Massachusetts Volunteer Infantry, one of the first major American military units made up of black soldiers. Colonel Robert Gould Shaw led the 54th Massachusetts on foot while they charged. Unfortunately, he was killed in the assault.

Tired, hungry, and proud, the black soldiers of the 54th Massachusetts Volunteer Infantry stood in the light of the setting sun and awaited the call to battle on the evening of July 18, 1863. The air was filled with the rumble of big guns, and the very ground on Morris Island, South Carolina, trembled beneath their feet. The regiment’s baptism of fire had come only two days before, but the memories of that sharp skirmish had already begun to fade in the shadow of the formidable task that now lay before them. 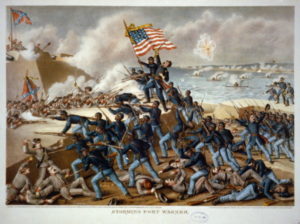 Although a tactical defeat, the publicity of the battle of Fort Wagner led to further actions for black U.S. troops in the Civil War, and it spurred additional recruitment that gave the U.S. Army a further numerical advantage over the Southern Troops. The U.S. forces besieged the fort after the unsuccessful assault. By August 25, U.S. entrenchments were close enough to attempt an assault on the Advanced Rifle Pits, 240 yards in front of the Battery, but this attempt was defeated. A second attempt, by the 24th Massachusetts Infantry on 26th August, was successful. After enduring almost 60 days of massive U.S. shelling, the Confederates abandoned it on the night of September 6–7th, 1863, withdrawing all their operable cannons and the garrison.

The path that had brought these determined men to the embattled sands of South Carolina had been a long one, born of idealism and fraught with difficulty. That they had succeeded in the face of bigotry and doubt was due in great measure to the colonel who led them. Slight and fair-haired, Robert Gould Shaw appeared even younger than his 25 years of age. However, despite his initial trepidations, the Harvard-educated son of abolitionist parents had assumed the weighty responsibilities of command, and never wavered in his fervent resolve to show friend and foe alike that black soldiers were the fighting equals of their white counterparts.

Daylight revealed the full extent of the Federal disaster. “In front of the fort the scene of carnage is indescribable,” Taliaferro wrote. ‘I have never seen so many deaths in the same space.’ At a cost of 36 killed and 145 wounded, while others were missing, Taliaferro garrison had inflicted more than 1,500 casualties on their assailants. The brave soldiers of the 54th Massachusetts had sustained the heaviest loss – 281 men, 54 of whom were killed or fatally wounded, and another 48 never accounted for. But the other regiments had paid almost as great a price. The 7th New Hampshire alone counted 77 killed or fatally wounded, 11 of whom were officers. The Confederates stripped the slain of useful apparel and souvenirs, then piled the dead into mass graves. Shaw was singled out for what the Southerners considered the ultimate insult by being interred with his fallen black troops.

Read more of the story via: https://www.civilwar.org/learn/article/fort-wagner-and-54th-massachusetts-volunteer-infantry