Sam Haskins: One of the Earliest Known Black Men to Work on the Los Angeles Fire Department

Call Fireman Sam Haskins is one of the earliest known black man to work on the Los Angeles Fire Department.

Haskins was born a slave in Virginia. He arrived in Los Angeles sometime in 1880. In 1892 Haskins worked as a “Call Fireman.” It was a paid position that was part time, filling in for members off sick or on vacation. Most call firemen eventually filled a permanent position when one became available.

On November 19, 1895 an alarm came into Engine Company No. 2 located at 2127 East First Street. The Engine Company responded, the hose wagon leading the way, the steam engine following. Sam Haskins was riding on the rear tailboard of the engine alongside of the engineer. The wagon hit a rough spot in the pavement on North Main Street, this caused Haskins to lose his balance. He fell forward into the large wheel on the left side of the boiler. He was fatally crushed and died a short time later at the Engine House.

Haskins was admired by all who knew him and had many friends. He was the first member of the department to die in the line of duty and his funeral was attended by Chief Walter S. Moore, his assistant, Ed R. Smith and Ira J. Francis, the electrician. A large detail of thirty men from the fire department as well as members of the police department attended. The cortege was headed by a band and Chief Moore delivered a grave side address. 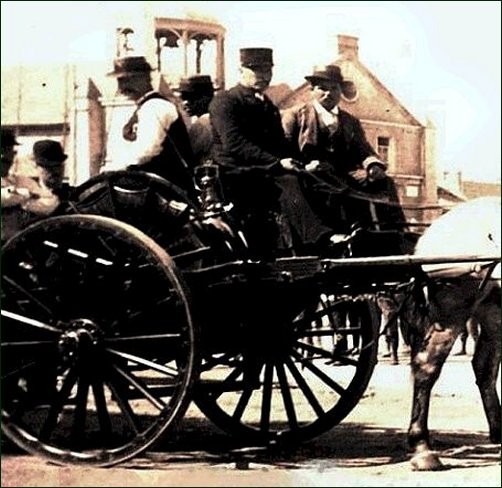