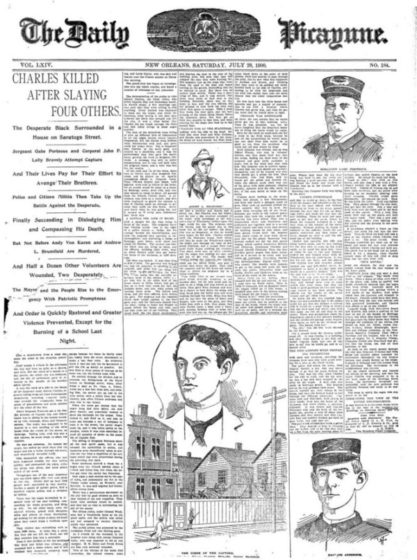 The Robert Charles Riots began when whites in New Orleans, Louisiana became infuriated after Robert Charles, an African-American, shot several white police officers on July 23, 1900. A manhunt for Charles began after he fled after an altercation with New Orleans police officers. The race riots lasted over four days and claimed 28 casualties, including Charles.

Robert Charles arrived in New Orleans from Mississippi as a self-educated, articulate activist.  He believed in self-defense for the African-American community and encouraged black people in the United States to move to Liberia to escape racial discrimination.

On the night of July 23, 1900, three white police officers, Sergeant Jules C. Aucion, Joseph D. Cantrelle, and August T. Mora, found Charles and his roommate, Leonard Pierce, sitting on a porch in a predominantly white neighborhood. After some police harassment, Charles and Mora drew their guns and exchanged shots. Although neither was killed, Charles fled to his residence for refuge. Later in the evening, the police interrogated Pierce to determine the location of Charles’ home. Upon the policemen arrival at his house, Charles fired his rifle in their direction, killing two officers, including the chief, Captain Day. While the rest of the officers sought cover, Charles fled the scene, leading to a police manhunt.

The next day, a crowd of white New Orleans residents gathered at the location where the policemen were killed and called for the lynching of Charles. Numerous events of lawlessness and civil unrest as mobs of whites roamed the city to terrorize the city’s African-American community occurred over the next three days. On July 25, three African-Americans were killed, 11 others were hospitalized and over 50 were injured. Exacerbating the rioting were local newspapers reporting that African-Americans were to blame for the unrest. Also some African-Americans provided assistance to Charles while others were sympathetic because of the growing voting and civil rights restrictions in the city long known for its racial tolerance.

On July 27, the police and white vigilantes surrounded another house where Charles had taken refuge. An ensuing shootout occurred throughout the day between the men outside and Charles, who returned the fire.