Ann Maria Weems: Escaped Slavery By Dressing as a Man

Ann Maria Weems belonged to Charles Price, a slave trader from Montgomery County in Rockville, Maryland. Weems witnessed her brothers being sold down south as well as her mother and one of her sisters. She knew one day she wanted to be free.

Numerous of people offered to purchase Weems’ freedom, but Price refused to set her free. Weems realized the only way for her to obtain her freedom would be via the Underground railroad. It was dangerous, but it was a risk she was willing to take. However, during this time, Price became wary that Weems had plans on running away, so he made her sleep beside his bed he shared with his wife.

J. Bigelow, a lawyer from Washington, D.C. who had helped Ann Maria’s family buy their freedom at an earlier time, set out to help her escape to freedom as well. As Price was suspicious of their intentions, Bigelow had been communicating about the eventual escape via letters with William Still, a conductor on the Underground Railroad stationed in Philadelphia. 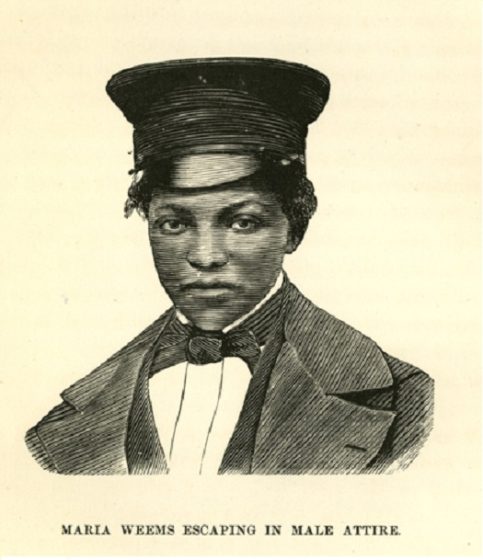 In 1855, Weems escaped from Price and his wife. Upon leaving the Price residence, she went on to Washington, D.C., and it is believed she spent some time with her family there before continuing on her journey to Bigelow’s residence.

Because Price was offering a $500.00 reward to anyone who could return Weems, she was not able to step outside of Bigelow’s home. While waiting for things to cool down, Bigelow and Still compiled a plan. The plan was to dress Weems up as a boy named “Joe Wright” in driver’s uniform, including a jacket, pants, bow tie, and cap.

In late November, the escape of Weems had died down and a man who was known as Dr. H, Bigelow’s family physician, arrived at the home to help Weems escape out the city. The plan was well thought out: Dr. H. drove his carriage and parked it along the side of the road in front of the White House, climbed into the passenger compartment, and waited for “Mr. Joe Wright” to arrive, escorted by Bigelow. To a lurking eye, they would only assume that Dr. H had just finished doing business within the White House and was now being escorted by his coachman.

Ann Maria, dressed as “Joe Wright,” drove the carriage out of the city without incident. They had driven for a few days and stopped to rest at the homes of a few of Dr. H’s friends. At these places, her secret identity remained, for the only person she was to reveal her identity to was William Still.

She reached Pennsylvania safely and stayed for a few days. She was then sent to New York, where she stayed with Rev. A.N. Freeman. Weems ended her traveling once she reached Canada, where she reunited with her aunt and uncle. She later settled in the Elgin Settlement and attended the Buxton Mission School.