Behanzin Bowelle “The King Shark,” is noted as being the most powerful of the West African Kings in the last years of the 19th Century. Behanzin was the master of his kingdom. A nod of his head meant life or death for his subjects. Not many were permitted to see him do even the most common things. His symbols are the shark, the egg (a rebus of his name), and a captive hanging from a flagpole (a reference to a boastful and rebellious Nago practitioner of harmful magic from Ketou whom the king hanged from a flagpole as punishment for his pride).

But, his most famous symbol is the smoking pipe, seen on the picture to the right. This is because he claimed that there wasn’t a minute in his life, even when he was a baby, that he was not smoking. 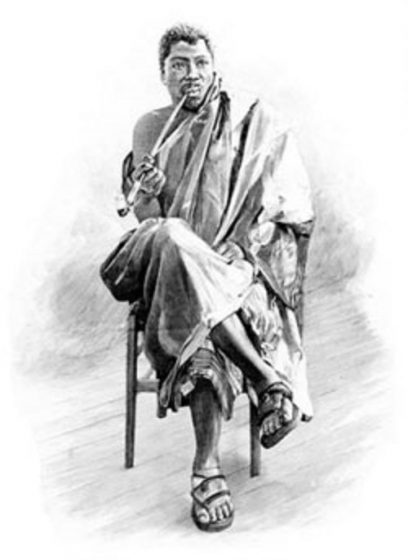 While marching, if King Bowelle  wanted a drink of water, a screen needed to be placed over his face until he finished drinking. When the water was passed to him, the soldiers would throw themselves on the ground and say “A-h-h-h”, as though they were also drinking. The saliva from Behanzin’s mouth was not allowed to touch the ground.

The Germans supplied Behanzin’s army with rifles which made them extremely powerful. The army was too strong for the neighboring French colonies.  In 1890, Behanzin had defeated a French expedition and made France pay for the use of Cotonou port. He declared a treaty made with France by his father, Gli-Gli in 1868 null and void, from this, the war began.

In 1894, a Senegalese mulatto was sent to fight against Behanzin. Behanzin was defeated by Colonel A.A. Dodds and his powerful French armed force. Behanzin was exiled to Martinique. Behanzin died in 1906 in Algeria. In 1928, his son had his body moved to Dahomey.

Behzanzin was succeeded by Agoliagbo, his distant relative and one-time Army Chief of Staff, the only potential ruler which the French were willing to instate.