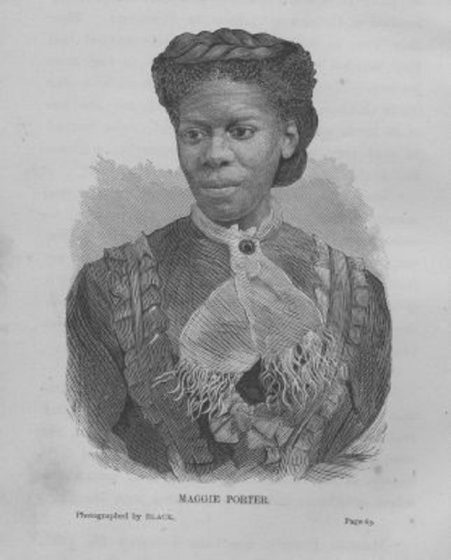 Maggie Porter was one of the original members of the Fisk Jubilee Singers and she was known to be quite the diva of the group.

Porter was one of three daughters born in Lebanon, Tennessee to a slave family belonging to Henry Frazier. At the start of the Civil War, Frazier moved to Nashville, taking Maggie’s family with him, and when Union soldiers took and occupied the city.

Frazier freed Maggie and her family after the publication of the Emancipation Proclamation. Porter later attend the Fisk Free Colored School, and later found work as a teacher in various country schools (one of which was burned down by the KKK).

In the winter of 1870, Porter was asked to sing the title role in Handel’s “Cantata of Esther” by George White, a musical and choral director at Fisk. Her success in the role led to her being offered a position with the new Fisk Jubilee Singers.
Porter traveled with the Jubilee Singers through all three of their original tours from 1871-1878 (with one exception). She sang lead soprano, and had a reputation as a diva. As a result, Porter was banished from the group for three months during their initial tour in 1871.

After finishing the tours, she spent some time living out of the country in Germany before returning to the US to participate in the “reorganized Fisk Jubilee Singers”, which contained alumnus of the original group but had no affiliation with Fisk.

Later, Porter and her husband formed a new group (also called the Fisk Jubilee Singers) with a few alumnus from the original Fisk Singers, and they toured the US, Canada, and Europe through the 1880s into the 1890s. She and her husband later moved to Detroit where they raised their family and continued to remain involved with local music. Maggie Porter died of natural causes at age 89 in 1942.