Ella Baker: The “Backbone” of the Civil Rights Movement 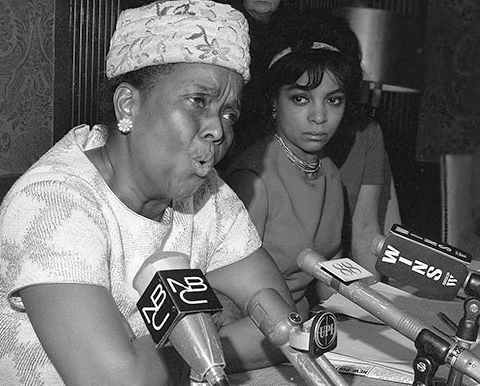 “Until the killing of black men, black mothers’ sons, becomes as important to the rest of the country as the killing of a white mother’s son, we who believe in freedom cannot rest until this happens.” -Ella Baker (1964)

Ella Baker has been called “one of the most important black leaders of the 20th century and perhaps the most influential woman of the Civil Rights Movement.” She worked tirelessly behind-the-scenes organizing and working with famous civil rights leaders, including Martin Luther King, Jr, Thurgood Marshall, and A. Philip Randolph.

Ella Jo Baker was born in Norfolk, Virginia, and raised by Georgiana and Blake Baker, her parents. When she was seven, her family moved to her mother’s hometown of Littleton in rural North Carolina. As a girl, Baker listened to her grandmother tell stories about slave revolts. Baker’s maternal grandmother Josephine Elizabeth “Bet” Ross, 1907 had been enslaved and was whipped for refusing to marry a man chosen for her by the slave master.

After completing her primary education, she attended Shaw University in Raleigh, North Carolina, where she graduated as class valedictorian in 1927. As a student, she was known to challenge school policies that she thought were unfair.

She moved to New York City and during the late 1920s, she worked as an editorial staff member of the American West Indian News, going on to take the position of editorial assistant at the Negro National News. Baker later joined the Young Negros’ Cooperative League (YNCL), which sought to develop black economic power through collective planning. Having befriended Schuyler, Baker joined in 1931 and soon became the group’s national director.

Baker worked for the Worker’s Education Project of the Works Progress Administration, where she taught courses in consumer education, labor history and African history. Baker immersed herself in the cultural and political milieu of Harlem in the 1930s. She also protested Italy’s invasion of Ethiopia and supported the campaign to free the Scottsboro defendants in Alabama. She founded the Negro History Club at the Harlem Library and regularly attended lectures and meetings at the YWCA.

In 1938, she began her long association with the National Association for the Advancement of Colored People (NAACP). Baker was hired in December 1940 as a secretary. She traveled widely, especially in the South, recruiting members, raising money, and organizing locally. She was named the director of branches in 1943. Having to care for her young niece, she decided to resign from the post because it required too much traveling. Baker began working for a number of local organizations, including the New York Urban League. She also helped out at the New York chapter of the NAACP.

In 1957, Baker joined the Southern Christian Leadership Conference as its executive director at the request of Dr. Martin Luther King Jr. During her time with the SCLC, Baker set up the event that led to the creation of the Student Nonviolent Coordinating Committee in 1960. She offered her support and counsel to this organization of student activists. Baker continued to fight for social justice and equality for the rest of her life. Baker died on her 83rd birthday, on December 13, 1986.