May 17, 1909, was the start Georgia Railroad Strike. White railroad unions—or brotherhoods—went on strike over Black laborers being brought in and advancing in position. Like many of the riots and strikes in the late-19th century and early 20th century in the American South, bitterness over the outcome of the Civil War and Reconstruction was the cause.

With the Georgia Railroad Strike, you saw the majority continue to struggle with moving towards an industrial focus. For years the South had been built on agriculture and focusing of Black labor in one particular area. With the country pushing industrial advancements and creating new jobs, Black labor moved with it and spread into different areas.

The union held a lot of power in the railroad in the state. This was evident in the long time practice of icing out Black firemen from advancement even with time put in. The railroad brotherhoods managed to get several policies passed—such as seniority-related advancement. Black firemen would build up a lot of seniority and as a result would be in place for advancement. In April 1909, The Georgia Railroad used the brotherhoods’ own policy to start promoting Black firemen as engineers. This added another log to the fire of racial resentment in the region.

It should be noted that while the pay was better, it was lower than what White people in those positions were getting. The position in question is that of the train engineer while the fireman is basically an apprentice who keeps the fire going.

This proved to be convenient for management to release White employees to move Black employees into the same spots at less cost and similar or better experience. The practice would backfire for the Georgia Railroad.

There was a strong campaign by the railroad union to run Black workers out of the railroad industry in Georgia. The Railroad moved Black men into engineer roles to keep trains running during the strike. As a result, there were some incidents of violence including Black employees getting injured. As expected, there also concerns that the strike could escalate into a full on riot and surrounding Black communities could be targeted. Twelve days later, the strike was ended with White employees agreeing to continue working and Black engineers and others losing their positions after negotiations were worked out.

The Georgia Railroad Strike was one of a number of labor strikes in 1909. Another railroad strike would occur the following month in McCloud, California. 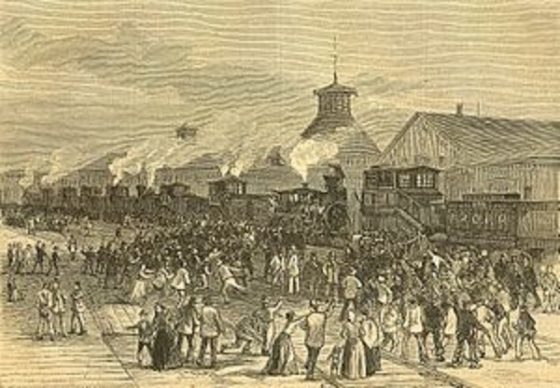 Georgiarailroadstrike
« Previous PostThe Origins of Twerking: Where It All Began Next Post »Moses Dickson: Founder of the Secret Organization "Knights of Liberty" to Help Fight Slavery