First Lt. John Robert Fox Made the Ultimate Sacrifice the Day after Christmas

On December 26, 1944, First Lieutenant John Robert Fox deliberately called for the artillery fire on his own position during World War II. He deemed this sacrifice necessarily in order to defeat a German attack in Italy, as his position had been overrun by the enemy. Fox was only 29 years old when he sacrificed himself for his country.

Born in Cincinnati, Ohio on May 18, 1915, Fox attended Wilberforce University, where he participated in ROTC and graduated with a commission of second lieutenant in 1940. Fox was in the 366th Infantry Regiment when he made the ultimate sacrifice in order to defeat the enemy and save the lives of his fellow soldiers. His brave actions permitted U.S. forces, who had been forced to withdraw, to organize a counterattack and regain control of the village. After the units had retaken the village, they found his body along with the bodies of about one hundred enemy soldiers. Fox was posthumously awarded the Distinguished Service Cross in 1982. 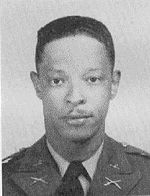 At the time, no Black solider had been awarded the prestigious Medal of Honor for serving during World War II. In 1993, the U.S. Army contracted Shaw University in Raleigh, North Carolina in order to research possible racial disparities regarding recipients of the award.  Upon realizing that many African-American soldiers had indeed been denied consideration, the research team recommended that the Army consider a group of 10 soldiers for the Medal of Honor. Of those soldiers, seven were selected to receive the award, which were presented by President William Clinton in a ceremony on January 13th, 1997. Fox received this honor more than 50 years after his death.