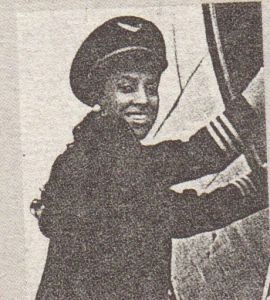 Baltimore native Jill Elaine Brown was the first African-American woman to serve as a pilot for a major U.S airline, Texas International Airlines she was 28.

Jill Elaine Brown was born in 1950 in Baltimore, Maryland. Her father Gilbert Brown who owned a construction company, and her mother Elaine was an art teacher at Baltimore school district. The family owned a farm in West Virginia, and by the age of nine, Brown had learned to operate a tractor and perform hard labor work.

After high school, Brown attended the University of Maryland, graduating with a degree in Home Economics in 1972. She accepted a teaching job in Massachusetts but realized that she wanted to fly more than anything. In 1974 she signed up for flight training in the U.S Navy, making her the first African-American woman to be admitted to the program. Finding the constraints of military protocols difficult, Brown left the program with an honorable discharge after just six months.

An article by Warren H. Wheeler, founder of the first African-American owned-and-operated airlines convinced Brown to apply for a position with the company. Brown persuaded Wheeler to grant her an interview and she was hired as a ticket counter clerk at the airline’s headquarters in Durham, North Carolina. Brown eventually worked her way up to become a pilot at Wheeler Airlines, where she logged enough hours to apply as a pilot for a major airline.