Keg Johnson: One of the Greatest Jazz Trombonist of His Time

Keg Johnson was a renowned jazz trombonist who played in several bands. 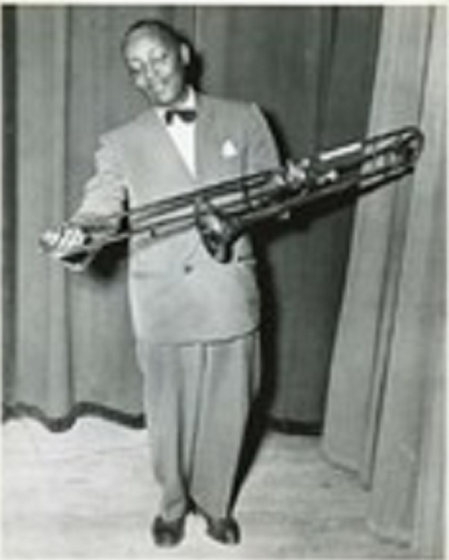 Frederic Homer “Keg” Johnson was born on November 19, 1908 in Dallas, Texas. His father was a choir director and also worked at a local Studebaker plant were Keg worked for a while.

Johnson and his younger brother, Budd Johnson, began their musical careers singing and playing first with their father and later with Portia Pittman, daughter of Booker T. Washington. Johnson played various instruments but is most noted for the trombone. The two brothers played in Dallas-area bands as the Blue Moon Chasers and later in Ben Smith’s Music Makers. Eventually they performed with an Amarillo group led by Gene Coy called The Happy Black Aces.

Johnson left for Chicago around 1930, to play with Louis Armstrong, recording his first solo on Armstrong’s Basin Street Blues album.

In 1933,  he moved to New York, where he played with such greats as Fletcher Henderson and Benny Carter, eventually playing with Cab Calloway at the Cotton Club. He remained with Cab Calloway for some 15 years, coinciding with fellow trombonists Claude Jones and DePriest Wheeler and later Tyree Glenn and Quentin Jackson, as well as other musicians such as Dizzy Gillespie, before moving to Los Angeles where he briefly changed careers renovating houses.

In the late 1950s, Johnson moved back to New York and became more active in music, working with Eddie Barefield, recording with Gil Evans in 1960, and for much of his last few years (starting in 1961) he was a member of Ray Charles’ big band before he died unexpectedly.