Looking Black On Today In 1964, Dr. King Was Awarded The Nobel Peace Prize 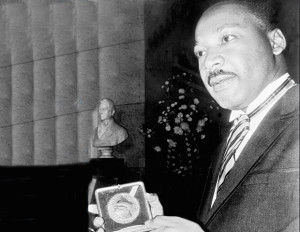 The Nobel Peace prize for 1964 was awarded to the Rev. Dr. Martin Luther King Jr.

At 35-year-old, the civil rights leader was  the youngest winner of the prize that Dr. Alfred Nobel instituted since the first was awarded in 1901.

The prize honors acts “for the furtherance of brotherhood among men and to the abolishment or reduction of standing armies and for the extension of these purposes.”

Dr. King said that “every penny” of the prize money, which amounts to about $54,000, would be given to the civil rights movement.

“I am glad people of other nations are concerned with our problems here,” he said. He added that he regarded the prize as a sign that world public opinion was on the side of those struggling for freedom and dignity.

He also said he saw no political implications in the award. “I am a minister of the gospel, not a political leader,” he said.”

He is also the 12th American to receive the peace Prize. The first, in 1950, was Dr. Ralph J. Bunche, Under Secretary of the United Nations. In 1960 the former leader of the African National Congress in South Africa, Chief Albert Luthuli, received the award.