May 19th, 1925: Malcolm X, an African-American, Muslim, and Human Rights Activist was Born

On this day, May 19th, 1925, an African-American, Muslim, minister, and most importantly, a human rights activist was born in Omaha, Nebraska. His name was Malcolm Little, who was later known as Malik El-Shabazz Hajj, and famously as “Malcolm X.” 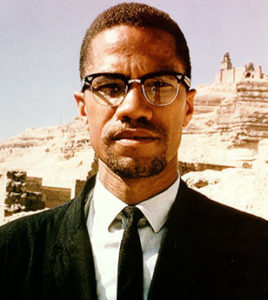 To Mr. Malcolm’s admirers, he has been known to be a courageous black advocate for equality and human rights for the African-Americans. He is one of the few black men who could rise out of the fearful crowd to condemn the white American racists in the harshest way ever seen, for their conspicuous crimes committed against the people from African-American ascent. Regardless of the few/minor negative criticisms from his detractors as a man who preaches violence and racism, Malcolm X became one of the most influential and greatest African-Americans in the history of human rights advocacy.

By the early and mid-1960s, Malcolm had embraced the Sunni Muslim culture. However, after an extended period of travelling across the Middle-East and Africa, he completed the Hajj and repudiated the Nation of Islam. Malcolm X disavowed racism and established the Muslim Mosque, Inc. alongside the Organization for African-American Unity. He further emphasized on the black self-determination, black self-esteem, as well as the Pan-Africanism.

During his early ministry, Malcolm X visited Muhammad Elijah- the leader of the Nation of Islam in August 1952 in Chicago, and later in June 1953, he was appointed as an assistant minister at the Nation’s Temple No. 1 in Detroit. Towards the close of that year, Malcolm X had established Boston’s Temple No. 11, and in the following year, in March 1954, he expanded the Philadelphia’s Temple No. 12. These successful activities made him be appointed the leader of Temple No. 7 in Harlem, where there was a rapid increase in membership as many African-Americans joined the Temple.

Throughout the 1950s, Malcolm X’s prominence grew rapidly, making him become an African-American public figure by 1957; consequently, his comments on the issues ad event of equality and human rights activism were frequently reported in the print media, radio channels, as well as television channels. From 1952 when he joined the Nation of Islam to 1964 when he fell apart with it, Malcolm X always preached of the Nation’s unity, equality for everyone, and eradication of racism that was tearing the U.S. apart. His advocacy, beliefs, and teachings towards the liberation of African-Americans included:

These statements alarmed very many people, including the FBI who launched an investigation or surveillance on his statements and activities.

Malcolm X is credited for reconnecting the blacks with their African heritage and raising their self-esteem. He is the man behind the vast spread of the Islamic culture among the black community in the U.S. Many African-Americans including those who lived in the Western and Northern cities of the U.S. undoubtedly felt that Malcolm X’s beliefs and teachings directly articulated their feelings and grievances concerning the widespread inequality in the American society. These further empowered the black movements including the Black Arts Movement and Black Power Movement, among others whose common and uniting slogan was “Black is Beautiful.”

Sadly, before accomplishing the journey he had started on the advocacy for equality and human rights, especially for the mixed races, Malcolm was assassinated on 21 February 1965, at around 2-3 p.m. by three gunmen, who were members of the Nation of Islam.

“Read more of the story via http://malcolmx.com/biography/”

The Autobiography of Malcolm X. With the assistance of Alex Haley. New York: Grove Press, 1965.

« Previous Post4 Pieces Of Evidence Supporting Belief That Black People Were In The Americas Before Christopher Columbus Next Post »Black To The Future: Meet The World’s Youngest Microsoft Certified Professional