0 Posted by Jae Jones - November 14, 2018 - LATEST POSTS
Melvin Morris served in the U.S. Army during the Vietnam War. He was a Special Forces Soldier (Green Beret). He should have received the Medal of Honor for his services in 1969, but due to prejudice, he was awarded the Distinguished Service Cross.
“I was proud of what I got,” said Mr. Morris, who was honored for his actions while serving as commander of a strike force near Chi Lang, South Vietnam. “As far as I was concerned, I was highly decorated. I was living and highly decorated.”
Melvin Morris was born on January 7, 1942 and grew up in Okmulgee, Oklahoma. In 1959 Morris joined the Oklahoma Army National Guard and soon after joined the active duty Army. He excelled in the military, becoming one of the first Green Berets in 1961 and twice volunteered for tours in Vietnam. While serving during the war, Staff Sgt. Morris led an advance across enemy lines to recover the body of a fallen sergeant. Morris single-handedly destroyed an enemy force with a bag of grenades in a series of bunkers that was pinning his battalion down. Morris was shot three times during that engagement.
The Distinguished Service Cross was awarded to then Staff Sgt. Morris in April 1970 for extraordinary heroism during this 1969 battle. After receiving the award, he returned to Vietnam the same month for his second tour. He retired at Fort Hood, Texas in May 1985.
Morris received the Medal of Honor from President Barack Obama in a March 18, 2014 ceremony in the White House. He also received the Bronze Star Medal with one Bronze Oak Leaf Cluster, Purple Heart with one Bronze Oak Leaf Cluster, Meritorious Service Medal, Air Medal, Army Commendation Medal with “V” Device and one Bronze Oak Leaf Cluster, Army Good Conduct Medal Silver with one Loop, National Defense Service Medal, Armed Forces Expeditionary Medal, Vietnam Service Medal with one Silver Star, Non-commissioned Officer Professional Development Ribbon with Numeral “3”, Army Service Ribbon, Overseas Service Ribbon with Numeral “4”, Combat Infantryman Badge, Master Parachutist Badge, Expert Marksmanship Badge with Rifle Bar, Special Forces Tab, Republic of Vietnam Gallantry Cross with Bronze Star, Republic of Vietnam Campaign Medal with “60” Device, Vietnam Parachutist Badge, Republic of Vietnam Gallantry Cross Unit Citation with Palm Device, Republic of Vietnam Civil Actions Honor Medal Citation, First Class. 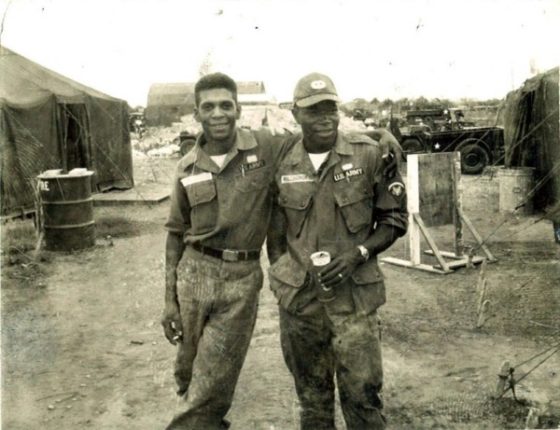