Most Violent Episode of the Civil Rights Movement in Virginia

The most violent episode of the civil rights movement in Virginia happened in Danville during the summer of 1963. It was during the same time the world was watching T. Eugene “Bull” Connor turn dogs and high-pressured hoses on demonstrators in Birmingham, Alabama. Over 3,330 people were arrested and in Danville, the number was around 600. Danville was a tobacco and textile town of about 50,000 residents, a third of whom were black.

In May 1883, the town’s black majority helped elect the Readjusters—a political coalition of moderate whites, Republicans, and African Americans—and blacks were appointed as aldermen and policemen. But on November 3, 1883, racial and political tensions erupted in an election-eve riot that left four black men dead and four wounded. Subsequently, blacks resigned from the police force and city council.

On May 31, 1963, a group of blacks met under the auspices of the Danville Christian Progressive Association. They gathered and then marched to the municipal building. Like their counterparts in Birmingham, the protesters in Danville pressed for desegregated facilities, equal employment opportunities, representation in city government, and creation of a biracial commission to monitor racial progress.

The city resisted the demands of the movement, and with every strength of power, created a hostile environment which included seeking injunctions under a pre-Civil war “John Brown” statute against any person conspiring to incite the black population to uprise against the city. 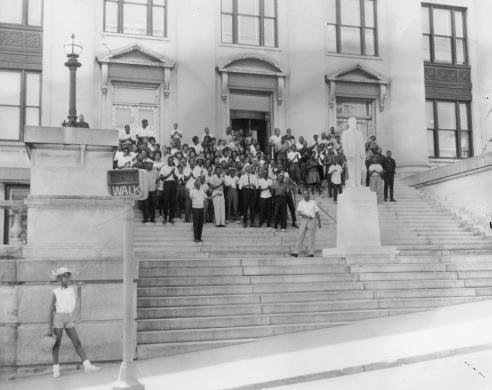