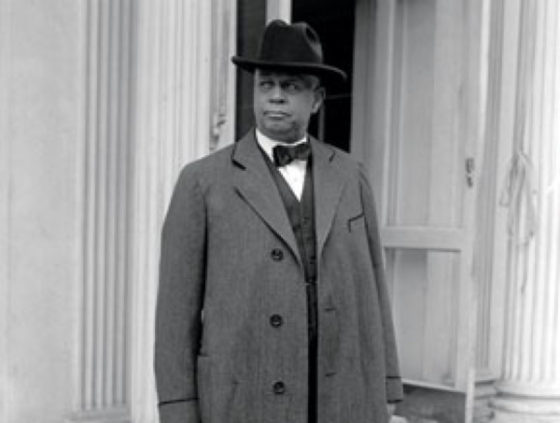 Oscar Stanton De Priest was the first African American elected to Congress in the post-Reconstruction era. Priest’s successful election campaign to represent a district in Chicago initiated the trend of black representation in northern cities, where the Great Migration sharply increased African-American populations.

De Priest was born on March 9, 1871, in Florence, Ala., to former slaves. He moved north, settling in Chicago. He built his fortune in the stock market and real estate, helping black families move into once all-white neighborhoods.

De Priest served three terms (1928-1935), as the only black representative in Congress. During his time in office, he introduced several anti-discrimination bills. His 1933 amendment barring discrimination in the Civilian Conservation Corps was passed by the Senate and signed into law by President Roosevelt. A second anti-lynching bill failed, even though it did not make lynching a federal crime. A third proposal–a bill to permit a transfer of jurisdiction if a defendant believed he or she could not get a fair trial because of race or religion–would be passed by another Congress in another era.

Although he was criticized by some civil rights activists for opposing federal aid to the needy, they applauded him for speaking in the South despite death threats. They also praised De Priest for telling an Alabama senator he was not big enough to prevent him from dining in the Senate restaurant and for defending the right of Howard University students to eat in the House restaurant. De Priest took the House restaurant issue to a special bipartisan House committee. In a three-month-long heated debate, the Republican minority argued that the restaurant’s discriminatory practice violated 14th Amendment rights to equal access. The Democratic majority skirted the issue by claiming that the restaurant was not open to the public, and the House restaurant remained segregated.