Remembering The Forgotten: Denmark Vesey, The Charleston Church Founder Who Was A Slave Rebellion Leader

Denmark Vessey, the leader of a historic slave rebellion was a founding member of the Emanuel AME Church in Charleston, South Carolina.   Wednesday’s tragic shooting has thrusted Denmark Vesey back into the national spotlight as many noted that the shooting described as a hate crime took place nearly 200 years after Vesey unsuccessfully tried to organize what would have been the largest slave revolt in American history. It was a struggle that later resulted in the historic South Carolina church being razed by angry white men.

Emanuel AME Church, known as “Mother Emanuel,” is said to be the oldest AME church in the South. It’s also home to one of the 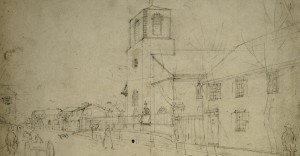 A drawing of a church in Charleston, South Carolina, circa 1812 John Rubens Smith / Library of Congress

country’s largest black congregations and is a historic civil rights site. Its name comes from the Hebrew name Emanuel, which means “God with us.”

The church was founded in part as a rebuke to local white churches, where slaves were taught the words of St. Paul: “Servants, obey your masters,” according to PBS. Vesey is famous for tragically leading a failed 1822 slave rebellion that saw the church set on fire by whites, forcing members to hold services underground for decades. The shooting Wednesday night took place a day after the anniversary of the June 16, 1822 slave rebellion.

Vesey was reportedly born in 1767 on the island of St. Thomas. As a child, he was purchased by Joseph Vesey, a Charleston-based slaver, and brought to the United States. In 1799, he won $1,500 in a city lottery and used the cash to purchase his freedom.

He was viewed as proud and strong-willed by his friends. “Even whilst walking through the streets in company with another,” one report stated, “he was not idle; for if his companion bowed to a white person, he would rebuke him, and observe that all men were born equal.” Critics, however, have described him as “a violent man, who planned to attack and kill Charleston whites.”

Vesey planned his slave rebellion with church members during weekly class meetings at his home. He frequently cited the Old Testament, particularly Exodus, which describes the story of Israelites fleeing slavery in Egypt. His plan called for slaves to slay their masters as they slept and then fight their way toward the docks, where they would sail for the so-called black republic of Haiti, a country in which slaves had already won their freedom from French colonists two decades earlier.

The plan failed after two of the slaves involved shared details of the plot before it could be carried out. Vesey and 34 others were eventually executed for supporting the rebellion, according to the National Park Service. Charleston officials exiled other church leaders and razed the building.

But Vesey’s legacy lived on. For abolitionists such as David Walker, Frederick Douglass and Harriet Beecher Stowe, he became a symbol of resistance. He has also gained prominence in African-American literature in recent years, with at least three books on his life being published since 1999, the Atlanticreported. They include “He Shall Go Out Free,” by Douglas R. Egerton, “Designs Against Charleston: The Trial Record of the Denmark Slave Conspiracy of 1822,” edited by Edward A. Pearson, and “Denmark Vesey,” by David Robertson.