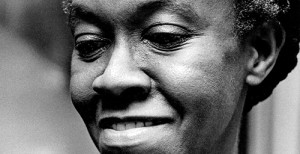 Gwendolyn Brooks was a highly regarded, much-honored poet, with the distinction of being the first black author to win the Pulitzer Prize. She also was poetry consultant to the Library of Congress—the first black woman to hold that position—and poet laureate of the State of Illinois. Many of Brooks’s works display a political consciousness, especially those from the 1960s and later, with several of her poems reflecting the civil rights activism of that period. Her body of work gave her, according to Dictionary of Literary Biography contributor George E. Kent, “a unique position in American letters. Not only has she combined a strong commitment to racial identity and equality with a mastery of poetic techniques, but she has also managed to bridge the gap between the academic poets of her generation in the 1940s and the young black militant writers of the 1960s.”

Brooks was born in Topeka, Kansas, but her family moved to Chicago when she was young. Her father was a janitor who had hoped to become a doctor; her mother was a schoolteacher and classically trained pianist. They were supportive of their daughter’s passion for reading and writing. Brooks was thirteen when her first published poem, “Eventide,” appeared in American Childhood; by the time she was seventeen she was publishing poems frequently in the Chicago Defender, a newspaper serving Chicago’s black population. After such formative experiences as attending junior college and working for the National Association for the Advancement of Colored People, she developed her craft in poetry workshops and began writing the poems, focusing on urban blacks, that would be published in her first collection, A Street in Bronzeville.