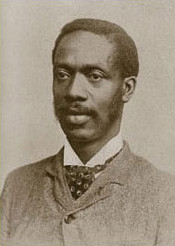 John Wesley Cromwell was a lawyer, teacher, civil servant, journalist, historian, and civil rights activist from Washington DC. He was part of the founding of the Bethel Literary and Historical Society and the American Negro Academy.

Cromwell was born September 5, 1846 in Portsmouth, Virginia. He was the youngest of twelve children. His parents were Willis H. and Elizabeth Carney Cromwell. Cromwell’s father was a ferryman on the Elizabeth River.

In 1851, his father purchased freedom for his family and they moved to Philadelphia. John attended school there from 1851 to 1856, and then moved to a teaching school, the Preparatory Department of the Institute for Colored Youth.

After graduating in the summer of 1864, Cromwell relocated to Columbia, Pennsylvania. He found work as a teacher but the school soon closed. Cromwell then started his own private school in Portsmouth, Virginia in April 1865. By the end of the year, he returned to Philadelphia and began teaching at the Baltimore Association for the Moral and Intellectual Improvement of the Colored People.

March 1866, the school was attacked and burned to the ground and Cromwell became a shooting target. He continued to work for the organization until May, but subsequently returned to Virginia where he worked for the American Missionary Association at Providence Church in Norfolk County, Virginia.

Cromwell moved to Washington DC and enrolled in the Howard University Law Department in 1871. He graduated in March, 1874 and was admitted to the bar before the Supreme Court of the District of Columbia. In the meantime, in 1872, Cromwell passed the civil service exam which could secure for him an appointment in the federal government and he took an appointment as a government clerk.

Twice promoted in his clerkship in 1873 and 1874, Cromwell along with Robert William Waring, was one of the first two black clerks to receive such an office in the departments he worked. His promotions led him to the position of chief examiner of the division of the money order department, and was register of money order accounts until his retirement from the civil service in 1885.

Cromwell was a strong advocate of black owned businesses and black economic success. He believed black people should try to frequent black owned businesses and praised the progress of wealthy blacks. He is the author of, The Negro in American History: Men and Women Eminent in the Evolution of the American of African Descent influenced Carter G. Woodson to create the Association for the Study of Negro Life and History in 1915. Cromwell died April 14, 1927.