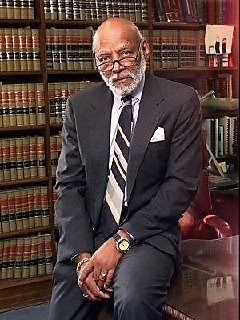 Adolpho A. Birch, became the first black man to hold several judicial posts in Nashville, Tennessee and the first to assume the chief justice position of the Tennessee Supreme Court.

Birch was born in Washington, D.C., the first child of an Episcopal minister of the same name who had migrated in 1894 to the United States from British Honduras (now Belize) seeking an education. Birch’s mother died when he was just six, and his father was left to raise him.

After graduation from Washington, D.C.’s famous Dunbar High School, Birch attended Lincoln University in Pennsylvania, later transferring to Howard University in D.C., where he received in 1956 both his undergraduate and law degrees at the same time. He also joined Kappa Alpha Psi fraternity while in college.

In 1966, Birch began a series of firsts for African American lawyers in Tennessee. He received appointment as the first black assistant attorney general in Nashville. In 1969, Governor Buford Ellington appointed him to a general sessions judgeship, the first state judicial post held by an African American in Tennessee; he was reelected twice. In 1978, Governor Ray Blanton appointed Birch as criminal court judge. Known for his stern bearing toward litigants and lawyers, Judge Birch received the endorsement of the Nashville Bar Association for his candidacy, and he was reelected to this position as well. In 1987, Governor Ned McWherter elevated him to the court of criminal appeals (he was again the first African American to hold the seat). Judge Birch was appointed to the Tennessee Supreme Court in 1993, and was later elected to a full term.

Birch died from cancer in Nashville on August 25, 2011. He had battled cancer since 2004, when he first received a cancer diagnosis and took a leave of absence from the Supreme Court to undergo treatment.

Adolpho A. Birch
« Previous PostBack Story: Potato Chips Were Invented By A Black Man By Accident Next Post »Civil Rights Act of 1968: The U.S. Supreme Court Ban on Housing Discrimination