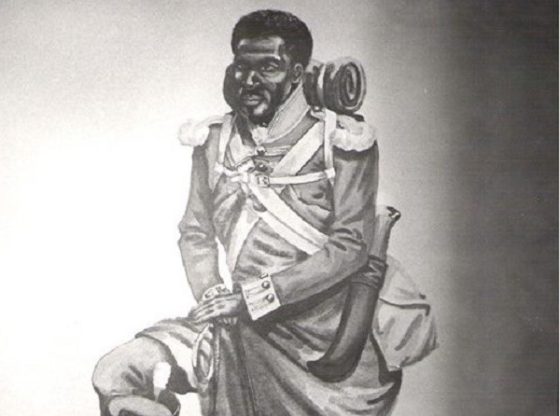 Richard Pierpoint was sold into slavery in 1760, at the age of 16. He took his surname from an English officer whom he served. Pierpoint also was known by the nicknames Black Dick, Captain Dick, Captain Pierpoint, Pawpine, and Parepoint.

In 1776, with the outbreak of the American Revolution, many African American slaves were offered freedom on the condition that they fought on the side of the British. By at least 1780 Pierpoint was one of about a dozen Africans fighting with the Butler’s Rangers regiment.

After the British lost the war, Pierpoint was evacuated across the Niagara River to Upper Canada with other fellow loyalists. For the first time in 20 years, Pierpoint stepped ashore in Canada as a free man.

In 1794, Pierpoint signed the Petition of Free Negroes, a document which requested that free blacks who had served the British as soldiers in the late war be given land grants adjacent to each other. Many free blacks, including Pierpoint, had no families to help them clear their land to take title. The petition was rejected. Pierpoint eventually sold or possibly abandoned his veteran’s grant. He found work as a laborer and disappeared from historical records until the beginning of another war.

In 1812, the American government declared war on Great Britain and made preparations to annex the Canadian colonies. Pierpoint sent a personal petition to the Upper Canadian government offering to raise a corps of “colored men” to fight for Upper Canada. The petition was initially rejected but when insufficient numbers of white volunteers stepped forward to serve, the Colored Corps of Upper Canada was approved.

Although Pierpoint was recognized for having strong leadership and military experience,  command of the unit was given to Robert Runchey, a white tavern owner. Pierpoint quietly his place as a private in the regiment he helped create. The Colored Corps participated in many key battles on the Niagara peninsula. In 1813 they were upgraded from infantry to “artificers,” an elite branch of the Royal Engineers.

After the corps disbanded and failing health set in for Pierpoint. He was eligible for a grant of 100 acres of old-growth forest to homestead. It was not common practice for a private to receive a grant of more than 100 acres. He homesteaded his veteran’s land grant near what is now the town of Fergus, and at the age of 78 became a property owner for the first time. Pierpoint died in 1838 and was buried on his land.