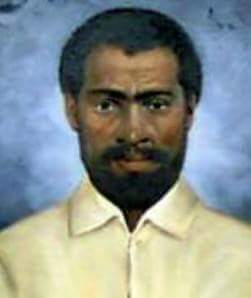 Nat Turner believed the eclipse was a final sign from God and 8 days later he and 70 other slaves killed an estimate of 55-65 white people in Southampton County, Virginia. This is famously known as Nat Turner’s Slave Rebellion.

Turner was highly intelligent and learned how to read and write at a young age. He grew up deeply religious and was often seen fasting, praying or immersed in reading the stories of the Bible.

He frequently had visions, which he interpreted as messages from God. These visions greatly influenced his life. For instance, when Turner was 21 years old he ran away from his owner, Samuel Turner, but returned a month later after becoming delirious from hunger and receiving a vision that told him to “return to the service of my earthly master.”

In 1824, while working in the fields under his new owner, Thomas Moore, Turner had his second vision, in which “the Saviour was about to lay down the yoke he had borne for the sins of men, and the great day of judgment was at hand.”

Turner often conducted Baptist services, and preached the Bible to his fellow slaves, who dubbed him “The Prophet.”Turner also had an influence over white people. In the case of Ethelred T. Brantley, Turner said that he was able to convince Brantley to “cease from his wickedness.”

By the spring of 1828, Turner was convinced that he “was ordained for some great purpose in the hands of the Almighty.”While working in his owner’s fields on May 12, Turner “heard a loud noise in the heavens, and the Spirit instantly appeared to me and said the Serpent was loosened, and Christ had laid down the yoke he had borne for the sins of men, and that I should take it on and fight against the Serpent, for the time was fast approaching when the first should be last and the last should be first.”