“A Company Of Her Own”: Pearl Primus Introduced African Dance To Audiences Outside African Culture

Pearl Eileen Primus (1919 –1994) was a dancer, choreographer and anthropologist who played an important role in the presentation of African dance to audiences outside African culture.

She is also a major contributor in a book entitled African Dance – edited by Kariamu Weish Asante from which I have drawn some observations.

She has been very influential in promoting African dance as an art form worthy of widespread study and performance.

Primus was born in Trinidad in 1919. Among her relations were drummers and initiates into the Shango/Spiritual Baptist faith. Her maternal grandfather, in particular, was an Ashanti musician from Ghana. When Pearl Primus was two years old she and her two brothers were brought to New York City where they grew up.

Primus did not originally intend to be a dancer. When she finished Hunter College High School,  she entered Hunter College as a pre-medical student majoring in biology. There she was an outstanding athlete in track and field. Upon graduating in 1940, Primus entered graduate school at New York University. While there, in pursuit of work to finance her studies, Primus found herself in the employ of the National Youth Administration. She was assigned to the NYA dance group as an understudy. Her natural abilities made her an excellent dancer and her instructors, recognized her talents and encouraged her to develop them.  Primus subsequently combined her studies in educational sociology and anthropology with her dance training. 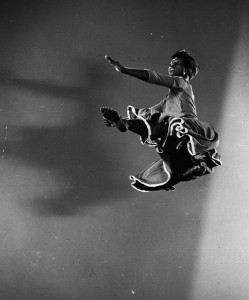 Among some of her most significant performances was that with Beryl McBurnie in Antilliana. From McBurnie, Primus learned Afro-Caribbean dance and the folk dances of the Caribbean. Her dancing ability and dramatic presence often stole the show.

Primus began to research African dance, “consulting books, articles, and pictures and visiting museums”. After six months, she had completed her first choreographed composition, African Ceremonial.   It was presented along with Strange Fruit, Rock Daniel, and Hard Time Blues at her debut performance on February 14, 1943 at the 92nd Street YMHA. Her performance was so outstanding that John Martin of the New York Times states that “she was entitled to a company of her own.”

« Previous PostDavid Leroy Nickens: First Black Ordained as a Minister in Ohio Next Post »The Avenue: A Vibrant African American Community that Had it "ALL"