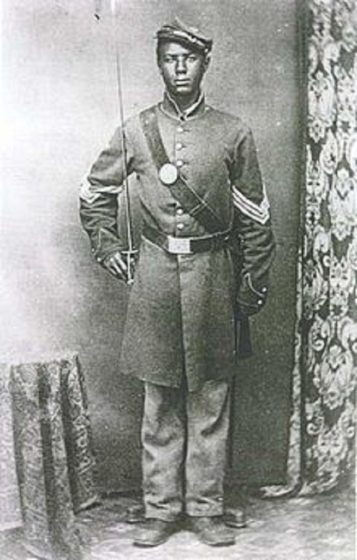 Andrew Jackson Smith was a Union Army soldier who received the Medal of Honor for his actions during the Civil War at the Battle of Honey Hill in South Carolina.

Smith was the son of a slave woman and slave owner, Elijah Smith. When the Civil War started, Smith’s owner planned to take him along with him to the Confederate military. When Young Andrew heard of the plans, he and another slave ran away from the plantation. They walked 25 miles to join the Union Army.

Smith was later taken in to work as a servant for Major John Warner. If Warner died during the war, Smith’s job was to make sure his belongings were returned to his hometown.

Smith was wounded a month later in the Battle of Shiloh. A bullet entered through his left temple and stopped in the middle of his forehead. The army surgeon removed the bullet only leaving a Smith with a scar. He later served as a corporal in the 55th Volunteer Infantry in Massachusetts.

On November 30, 1864, while serving at the Battle of Honey Hill in South Carolina, the units came under fire while crossing a swamp and the color bearer was killed. Smith picked up the flag and carried it the rest of the fight. Although being nominated for the Medal of Honor for his actions in 1916, Smith was not awarded the honor until President Bill Clinton awarded 2001 to several of his descendants. The Army denied the nomination before that for lack of official records for the case.

Andrew Jackson Smith
« Previous PostWilliam G. Allen: Tarred, Feathered & Beaten all in the Name of Love Next Post »What Made Slavery and the Cotton Economy So Desirable