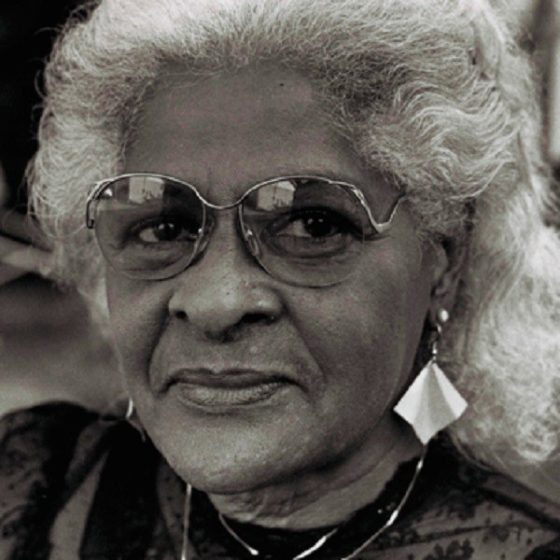 Robinson was born in Charleston, SC on February 7, 1914. Her father was a bricklayer, plasterer, and tile setter, which made the family financially independent. Robinson’s parents discouraged their nine children from seeking jobs as domestic workers in white Charleston homes.

After marrying in the 1930s and having one daughter, her husband left to find work but never returned home. Robinson moved to New York City in the 1940s with the intentions of finding a career as a musician but instead, she found herself working in a garment factory, beauty shop, and eventually a civil servant. She later enjoyed the privilege of living in a non-segregated community.

In the late 1940s, Robinson returned to help care for her parents, Robinson joined the National Association for the Advancement of Colored People (NAACP) and became involved with voter-registration drives. Self-employed as a beautician, Robinson could undertake civil rights work without fear of economic reprisal from the white community. In 1954, Septima Clark convinced Robinson to attend a workshop at the Highlander Folk School in Monteagle, Tennessee, where she met activists such as Rosa Parks and Esau Jenkins.

With financial backing from the Field Foundation and the Highlander School, Jenkins opened the first of what became known as the Citizenship Schools on Johns Island in January 1957. Robinson becomes the school’s first teacher. Basing her curriculum on the practical needs of the people, she achieved great success with her first class. At the end of the five-month school period, all fourteen pupils could read and write their own names and do math problems.

Robinson was chosen by Highlander and the Southern Christian Leadership Conference (SCLC) to set up voter-registration workshops in 1961 across the South. Robinson left the SCLC in 1970 and was hired by the South Carolina Commission of Farm Workers (SCCFW), for which she supervised Volunteers in Service to America (VISTA) volunteers in Charleston. In 1972, she ran for the state House of Representatives, the first African American woman to do so, but was defeated. Bernice Robinson died on September 3, 1994.