Black Jocko: Legend Has it as a Part of History for the Underground Railroad

For those who have seen these statues sitting on front lawns or stored away among antiques of elders of the family, you might be surprise to know the “bla 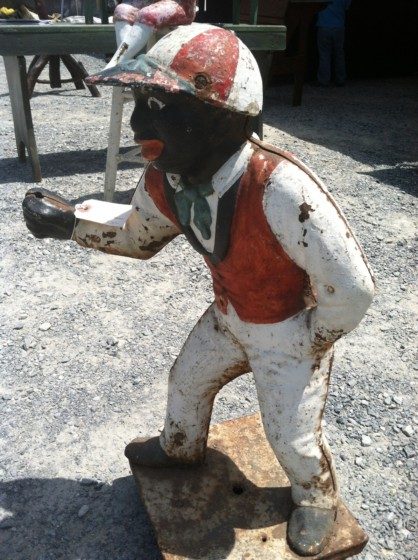 ck jockey” holding the lantern has a deep “Old South” roots legend behind it. Apparently,  these “Jockos” played a significant and notable role in the first half of the 19th century.

A ribbon was left hanging on the statue, if  a green ribbon was hanging it indicated safety, but if there was a red ribbon hanging it was an indication to keep moving.  There were other codes used as well such as a striped jocko’s shirt was the code that the location was a safe place to swap horses. If a ‘jocko’ was  in a tailed coat, it meant overnight lodging and food was available. A blue sailor’s waistcoat meant the homeowner could take travelers to a port and get them on a ship to Canada.

It is easy for those who do know the history of the displayed ‘black jockey’ to have feelings of humiliation and anger when seeing the statue. But these figures at some point during the early 19th century was a clandestine used on the Underground Railroad. The statues helped lead many runaways to freedom.

Legend actually has it that the ‘black jockey’ all started with George Washington. He created the first groomsman hitching post, or “Jocko,” in honor of the frozen slave in the 1770s.

According to Florida Atlantic University history professor Kenneth W. Goings, in his book Mammy and Uncle Moses (Indiana University Press), Gen. Washington wanted to mount a surprise attack on a British encampment during the Revolutionary War. During this time, several slaves and free men joined the group.

Tom Graves was a young black man, who wanted to fight in the war, but Washington didn’t allow it because he was too young. However, he did ask the young Graves to hold a lantern for the troops. Young Jocko died in that night in the snow and ice; he froze to death.

After the War, and after serving as the first President of the United States, George Washington returned to his estate at Mount Vernon. There he ordered two sculptures to be erected commemorating America’s great political and military crisis: A Dove of Peace in iron-work was added to the cupola as a weather vane and a statue of Jocko stepping bravely forward to hold the horses as if saying, “I will, ” was set up on the lawn before the mansion.

However, there are others who still have their of the black jockey, and believe it somehow commemorates organized horse riding of blacks during that time.