The “Black String Band” was an organization created to protect abolitionist John Brown while he was planning his raid on the federal arsenal at Harper’s Ferry, Virginia.

Brown, believed that African Americans should immediately attain their freedom from slavery and also gain equal rights with whites. During the early 1850s, Brown, a conductor on the Underground Railroad in Ohio, began to utilize violence against slaveowners to end slavery. After leaving Ohio for a period of time to participate in “Bleeding Kansas,” Brown returned to the state, settling in Ashtabula County. Here, Brown began to plot his raid on Harper’s Ferry Virginia, which would take place on October 16, 1859.

Supporters of Brown in Ashtabula County feared that authorities may try to arrest the abolitionist. They also believed that pro-slavery people might try to kill Brown. To protect Brown, supporters formed the “Black String Band” and assembled a sizable arsenal of weapons in the community of Rome, Ohio. It remains unclear why these men adopted the name the “Black String Band.” One unconfirmed account claims that members each carried a piece of black string of a certain length. They would show the string to other members to prove their membership in the organization. Another story claims that members tied the collars of their shirts closed with black string instead of using buttons. The Black String Band probably formed in 1859, and it appears to have ended in 1860, following Brown’s death. 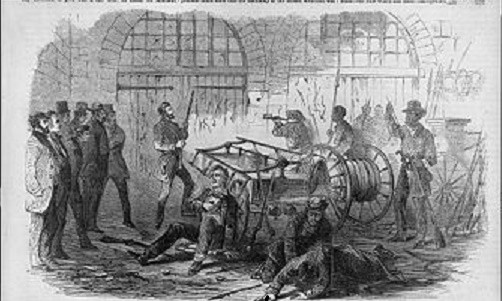 Black String Band
« Previous PostElias Brown Jr: Free African American Almost Tricked into Becoming a Slave Next Post »"All Men Are Created Equal": How Mum Bett Not Only Won Her Lawsuit For Freedom But Was Assessed Damages For Her Labor