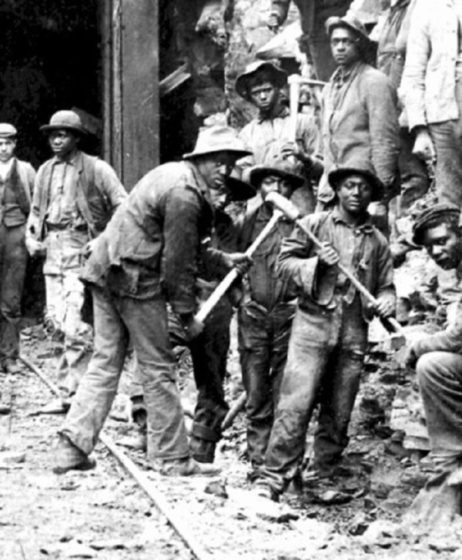 The Bonanza Race War of 1904 was a race riot/labor war that occurred in the coal-mining city of  Bonanza, Sebastian and resulted in the expulsion of African Americans from the city following several days of violence.

The event is indicative of a general antipathy toward black labor in the coal mines of western Arkansas, and, by the end of the decade, African Americans were only found in two mining communities because they were forced out of the rest.

Bonanza was a well-known coal-mining city. It was incorporated in 1898. Central Coal and Coke had three mines there and the St. Louis-San Francisco Railway provided easy transportation for both coal and other goods for travelers. Because of the mines, Bonanza was the largest city in its township and hosted all the businesses typical of a mining city, including a company store, restaurants, saloons, and general stores.

African Americans working in the coal mines probably started under the convict lease system; the State of Arkansas was big for renting out prisoners to private businesses, which including mining companies. Black convicts labored hard and were often subject to barbaric conditions and beat regularly.

Mining companies also employed black laborers in order to break strikes. For example, in 1899, after representatives of the United Mine Workers of American launched a strike against Kansas and Texas Coal Company, the company began filling its mines with laborers imported from out of state, usually African Americans In response, the striking miners directed a lot of their violence against their black replacements.

The event that led up to the Bonanza Race War started on April 27, 1904. It was reported that about 200 white citizens met in Bonanza and decided that about forty Blacks working for Central Coal and Coke Company had to be forced to leave town. It was rumored that the union was involved in the attempt to intimidate the African-Americans as well.

On Saturday night, April 30, tensions exploded when black and white patrons of Clinton’s Saloon traded shots outside the establishment. This led to a city-wide exchange of bullets; the Fort Smith Times reported that “as many as 500 shots were fired during the night.” Most of these shots were apparently fired into the homes of African Americans. Armed mobs roamed the town, shooting sporadically and warning black residents to leave within twenty-four hours. The gunfire continued through Sunday night, but no one was reported killed or injured. By Monday, May 2, most of the black women and children had already left the city, and other black residents were making arrangements to leave quickly. The Arkansas Gazette reported on May 7 that nearly all African Americans had left the city. By 1910, all the blacks had been driven from all the mining camps.