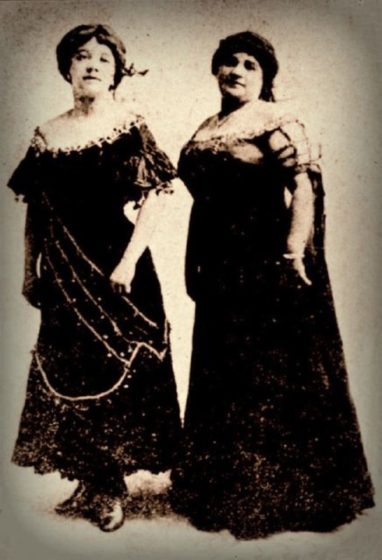 Mabel and Emma Griffin were born in Louisville, Kentucky. They were the highly popular vaudeville performers known as The Griffin Sisters who toured throughout the United States.

The sisters were listed as mulattoes, along with their brother Henry, who was a musician, and their grandmother Mary Montgomery, all in the 1910 U.S. Federal Census when the family lived in Chicago.

They began performing as members of John Isham’s Octoroons Company and toured with several other companies before organizing their own theater booking agency in 1913 in Chicago. The women had been considered premiere performers and broke theater attendance records while with the Sherman H. Dudley agency, created in 1912 as the first African American operated vaudeville circuit.

The Griffin Agency was one of the earliest to be managed by African American women, and they also had a school of vaudeville art. Emma Griffin encouraged African American performers to use either the Dudley Agency or the Griffin Agency. The sisters also opened the Alamon Theater in Indianapolis, Indiana, in April of 1914. They managed the Majestic Theater in Washington, D.C. in June of 1914.