Ephraim Slaughter: Escaped Slavery and Enlisted in the Union Army 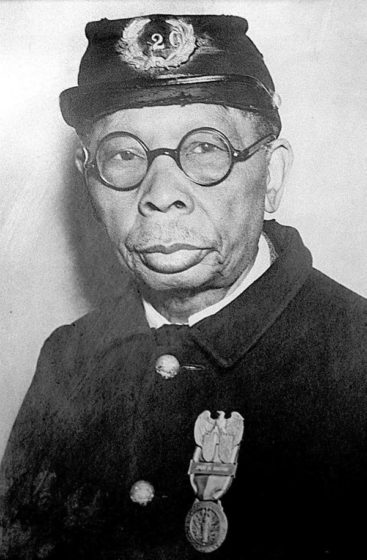 Ephraim Slaughter escaped to freedom in 1863. He later enlisted in the Union army where he served for three years under the name Ephraim Newsome. Slaughter was assigned to Company B of the 3rd North Carolina Colored Infantry, which became the 37th USCT (United States Colored Troops), where he finished his service.

Slaughter was born into slavery in Hertford County, N.C., in 1846.

In 1869, Slaughter, by then using the name of his slave owner, moved to Harrisburg. He worked in the legendary Lochiel Hotel near the Capitol, where pols smoked their cigars and made their deals. He owned property. He co-founded A.M.E. Zion Church on N. 6th Street. He was active in the Grand Army of the Republic, the powerful organization for Union Civil War veterans.

He was married twice, first in 1880 to a South Carolina woman named Carrie. That marriage lasted until her death in 1935. By then, in his old age, he made a fond but practical match with Georgiana Williams Mitchell, a widow 43 years his junior.

In his later years, he was often honored as one of the rapidly vanishing connections to the Civil War. His photo appeared in newspapers, and he was chief marshal for Harrisburg’s 1941 Memorial Day parade, with fellow veteran John Barton who served as chief of staff. They were, as a newspaper wrote, “both negroes.”

In 1938, Slaughter was invited to President Franklin D. Roosevelt’s dedication of the Peace Memorial at Gettysburg. He and Barton were chauffeured to Gettysburg, but African-Americans were barred from any part of the ceremony involving interaction with whites. Slaughter died on Feb. 17, 1943, at the age of 95.

A Slave, a Free Man: Exhibit opens on Harrisburg’s own Ephraim Slaughter.