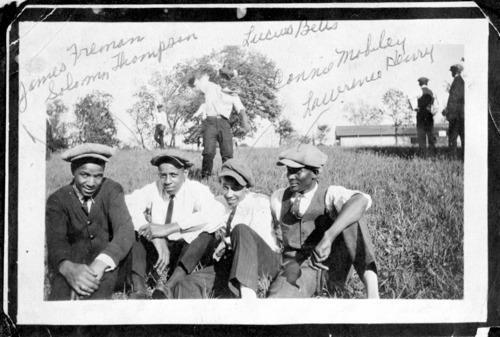 This black and white photograph shows a group of African-American men from Nicodemus, Kansas, posing informally. The men have been identified from left to right as James Freeman, Solomon Thompson, Lucus Bells, Connie Mobley, Lawrence Henry.
Date: Between 1920 and 1939

Benjamin “Pap” Singleton (1809 – 1892) was an American activist and businessman best known for his role in establishing African-American settlements in Kansas.

Formerly enslaved in Tennessee he escaped to freedom in 1846 and became a noted abolitionist, community leader, and spokesman for African-American civil rights. He returned to Tennessee during the Union Occupation in 1862 but soon concluded that blacks would never achieve economic equality in the white-dominated south. After the end of Reconstruction, Singleton organized the movement of thousands of black colonists, known as Exodusters, to find settlements in Kansas.

A prominent voice for early black nationalism, he became involved in promoting and coordinating black-owned businesses in Kansas and developed an interest in the Back-to-Africa Movement. (Black History Pages)

Singleton finds Kansas as a potential site for black emigration, organizing the Tennessee Real Estate and Homestead Association with his business partner, Columbus Johnson. This company founded the Dunlap Colony in Morris County and a short-lived settlement in Cherokee County.

Although his company did not create many successful colonies, through his advertisements he was able to help thousands of Exodusters relocate to Kansas, leading to his name as “Father of the Exodus.” Singleton also organized a political group called the United Colored Links and later in life he promoted black colonization.