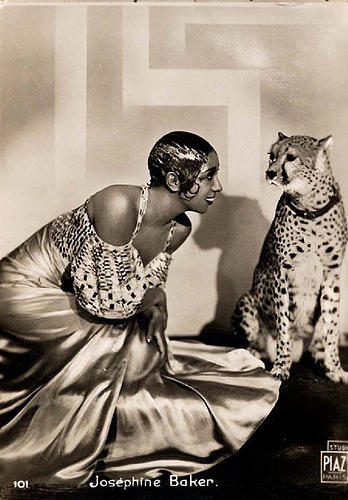 In a photo that we found on Black History Album , we see this great image called “Josephine Baker with Her Cheetah, c.1930-32” . Given the nicknames “Black Venus,” “Black Pearl,””Creole Goddess,” and “La Baker” in her adopted country of France, Josephine Baker (1906-1975), was known as “The It Girl Who Danced Her Way Through The 20’s And 30’s Only Dressed In Bananas.”

A dancer, singer, actress, and comedian all in one, Josephine Baker was is noted for being the first woman of African descent to star in a major motion picture, to integrate an American concert hall, and to become a world famous entertainer. Her acts were both outrageously funny and quite sexy. She was a star of stage, screen, and recordings, a civil rights activist, and an honored military woman during World War II.