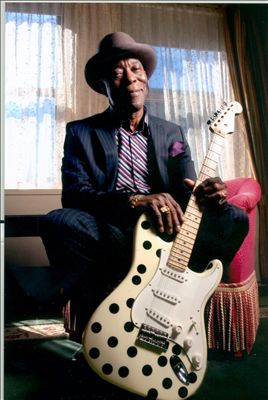 Buddy Guy is one of the most celebrated blues guitarists of his generation (and arguably the most celebrated), possessing a sound and style that embodied the traditions of classic Chicago blues while also embracing the fire and flash of rock & roll. Guy spent much of his career as a well-regarded journeymen, cited as a modern master by contemporary blues fans but not breaking through to a larger audience, before he finally caught the brass ring in the 1990s and released a series of albums that made him one of the biggest blues acts of the day, a seasoned veteran with a modern edge. And few guitarists of any genre have enjoyed the respect of their peers as Guy has, with such giants as Eric Clapton, Jimi Hendrix, Jeff Beck, Keith Richards, Stevie Ray Vaughan, and Mark Knopfler all citing him as a personal favorite.

George “Buddy” Guy was born in Lettsworth, Louisiana on July 30, 1936, and is said to have first learned to play on a homemade two-string instrument fashioned from wire and tin cans. Guy graduated to an acoustic guitar, and began soaking up the influences of blues players such as T-Bone Walker, B.B. King, and Lightnin’ Hopkins; as his family relocated to Baton Rouge, Guy had the opportunity to see live performances by Lightnin’ Slim (aka Otis Hicks) and Guitar Slim, whose raw, forceful sound and over the top showmanship left a serious impression on Guy. Guy started playing professionally when he became a sideman for John “Big Poppa” Tilley, where he learned to work the crowd and overcome early bouts of stage fright. In 1957, Guy cut a demo tape at a local radio station and sent a copy to Chess Records, the label that was home to such giants as Muddy Waters, Howlin’ Wolf, and Etta James, shortly before buying a one-way train ticket and moving to Chicago, eager to make music his career.