The Houston Negro Hospital opened to patients on May 14, 1927. It was created when the earlier Black Union-Jeremiah Hospital was no longer capable of accommodating the rapidly growing black population of Houston, Texas.

The hospital sold families memberships for $6 a year using a prepaid system. Through the membership, family members were eligible for free hospitalization for a limited number of days each year. While such memberships were not a prerequisite for care, and thus all African Americans were welcome at the hospital, this prepaid system helped underwrite hospital operations.

The entire hospital staff was black as well, which was rare in the United States at that time. Isaiah Milligan Terrell retired from his presidency at Houston College in 1925 to become the first superintendent of the hospital.  Houston Negro Hospital was a safe haven for black healthcare professionals, as they were free to utilize their skills, nurture professional relations, and develop financial security. 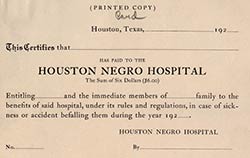 The hospital was not as successful as expected during its first few years. It lacked patients partly because many black Houstonians preferred to rely on treatment at white hospitals, as many people felt that the white hospitals were better staffed and equipped. Several improvements were implemented at Houston Negro Hospital in the 1930s, including a new x-ray department and laboratory, which raised confidence in the level of treatment that patients received there.

Throughout the Great Depression, a number of hospitals in Houston and across the nation closed due to financial troubles. Nevertheless, black community leaders rallied behind Houston Negro and were able to keep the facility open. Upon the completion of an expansion project to add an extra wing to the hospital in 1961, the entire facility was renamed Riverside General Hospital. The hospital buildings today are listed on the National Register of Historic Places.