The Jenkins Orphanage, which was established in 1891 by Rev. Daniel J. Jenkins Jenkins, was created in order to help the African American street children he encountered in Charleston, South Carolina.

From the beginning, the orphanage was a success in terms of its mission. The first year alone, over 360 boys were housed at the institution. Most children at the home were between the ages of 5 to 18 years old, but eventually Jenkins expanded the range from 3 to 20.

The original site of this orphanage was at 660 King Street, but the number of orphans on roll quickly outgrew the facilities.  In 1893, the orphanage moved to the Old Marine Hospital at 20 Franklin Street.

The home accepted donations of musical instruments and hired local musicians to tutor the young boys. Evidence shows that the boys learned to read music and became proficient in several instruments. Not long after, a band was organized, starring the children from the orphanage. They debuted on the streets of Charleston, and ultimately played in the inaugural parades of President Theodore Roosevelt and William Taft. They toured the U.S. and even played to international audiences throughout Europe.

Tom Delaney, William “Cat” Anderson, and Freddie Green are a few of the alumni who attended the Jenkins Orphanage Band who made it big time. The orphanage was provided numerous children with another chance at life, which many took advantage of by pursuing a variety of careers, including education and law. The orphanage is now a National Historic Landmark, located in North Charleston. 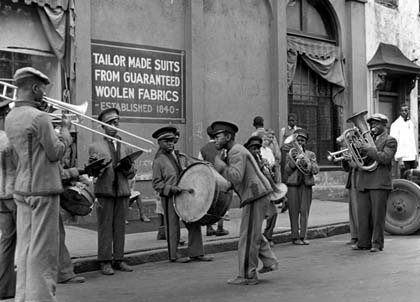