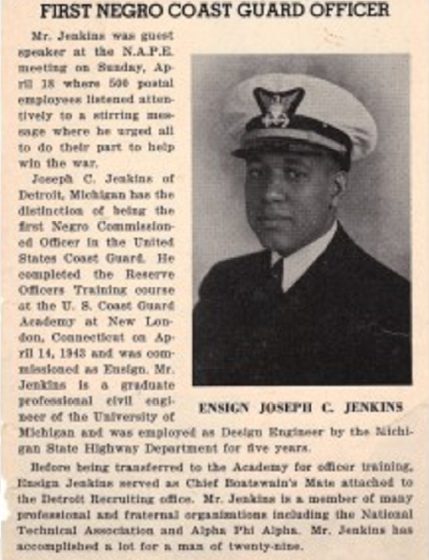 Distinction as the Coast Guard’s first recognized African-American officer belongs to Joseph Charles Jenkins. Born in 1914, he attended the University of Michigan, where he was the only African-American in the engineering department at the time. While there, Jenkins was also a member of Alpha Phi Alpha, the nation’s first African-American Greek-letter fraternity.

After graduation, Jenkins became a highway design engineer for the state of Michigan, overseeing the construction of many Michigan highways. While working, Jenkins earned a graduate business administration degree from Wayne State University.

In June 1942, Jenkins began his service as a BM1; however, by April 14, 1943, he had completed Reserve Officer Training at the Academy and received an officer’s commission. By August of 1943, Jenkins was one of two African-American officers in the Coast Guard.

Jenkins later continued his career for the Michigan State Highway Department and was the assistant director of the Metropolitan Detroit area. He died in 1959.