In 1944, The American Army Transportation Corps started the “Red Ball Express,” a huge trucking operation used to supply World War II troops in Europe with supplies. The business was had a major impact on the Nazi defeat by ensuring the U.S. and Allied warfighters had what they needed to move swiftly across France into Germany.

Nearly 75 percent of all Red Ball Express drivers were black Americans. It was believed that blacks lacked the courage and bravery for combat during this time, so the Army relegated blacks into what was looked upon as safe service and supply outfit tasks. No blacks were accepted into combat troops until 1942.

The “Red Ball Express” truck convoy system stretched from Normandy to Paris and eventually to the front along France’s northeastern borderland. The route was always marked with red balls. On an average day, 900 fully loaded vehicles were on the Red Ball route round the clock with drivers officially ordered to observe 60-yard intervals and a top speed of 25 miles per hour. The drivers of the trucks rolled out all day, every day, regardless of the weather conditions.

The drivers would drive at speeds no faster than 25 mph during enemy territory. There could be up to 140 trucks on French roads at one time to supply General Patton’s Third Army 350 miles away, as well as the First Army, at a 400-mile distance. Night driving had to be done without headlights to avoid being spotted by enemies. 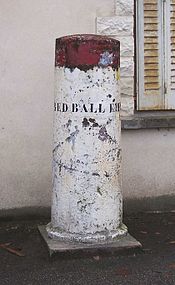 The operation ended in November 1944. By that time, about 412,000 tons of various items, including gasoline, ammunition, oil, food, and other needed supplies had been delivered by the Red Ball Express.