Cook was born on January 1, 1869. He was the son of John Cook, the then treasurer of Howard University. After completing his primary education, Cook studied at Oberlin College. He studied violin, returning three years later to give his first recitals. He studied in Berlin with the great Joseph Joachim, Cook returned to the United States and within five years was performing at Carnegie Hall.

In 1904, Cook wrote the music for The Southerners, the first Broadway musical with an interracial cast. He also gained celebrity for his songs, including Who Dat Say Chicken, Darktown Is Out Tonight both in 1902, and Bon Bon Buddy 1908; all were among the first songs recorded by the Victor Talking Machine Company. In the early 1900s, Cook organized the New York Syncopated Orchestra, which toured the United States and Europe.

He produced several concerts and organized many choral societies in both New York and in Washington, D.C. The New York Syncopated Orchestra, which he founded, toured the United States in 1918 and then went to England in 1919 for a command performance for King George V.

Cook returned to New York after his group disbanded in 1922. He then organized the Clef Club Orchestra which included Paul Roberson. Cook died in 1944. 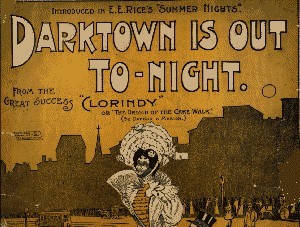