Richard Ewell: First African-American to Win a National Title in Both Pair Skating and Single Skating 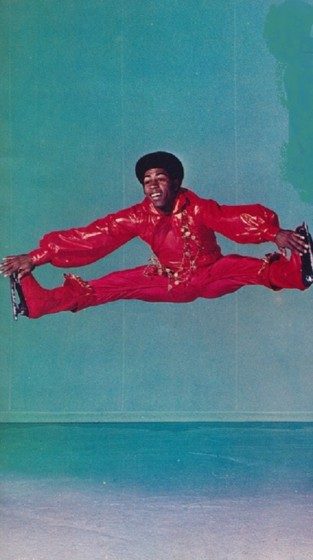 Richard Ewell was the first African-American to win a national title in both pair skating and single skating. He would also later win the National Junior Men in 1970, and in 1972,  he won the National Junior Pair skating title with African-American skater Michelle McCladdie.
Ewell was born in Los Angeles, where he also grew up. He began skating in 1963. However, during this time, not too many African-American were seen in the sport. Before going to the rink, Ewell’s mother worried that the rink might not allow blacks, so she called ahead to avoid conflict when they arrived.

On that particular day the Ewell’s showed up at the rink, Mabel Fairbanks, who became a legend in her right, was there also. Ewell’s mother approached Fairbanks and asked her about lessons. Soon the whole Ewell family were taking skating lessons under Fairbanks. The first arena at which the Ewell family skated, The Polar Palace, burned down in April of 1963. After the rink had burned, the Ewell family looked for another location. They decided to try a skating rink in Culver City, California. When they arrived at the rink, Fairbanks was already there giving lessons.

Fairbanks recognized the talent in Ewell, especially at jumping. He was so good at it that many people thought he would become the first person to ever land a quadruple jump.

Too much amazement, Ewell passed all the figure skating tests quite quickly. In those days, to enter qualifying events, a skater had to pass a series of compulsory figure tests, which was quite a task for Ewell, since his talent was in jumping and not in the compulsory figures. He passed and was accepted into the All Year Figure Skating Club.

He won the novice men’s event at his first regionals. A couple of years later, in 1969, he qualified for nationals in the junior men’s division. No one, including Ewell, expected him to win the junior division at the 1970 U.S Championships, but he surpassed expectations. He placed sixth in figures and then performed the free skate of his life.

Ewell was teamed up with Michelle McCladdie, another African-American in 1968. The team won the novice pairs event at the Southwest Pacific regionals and at the Pacific Coast Sectionals in 1969. In 1970, they moved up to the junior level and placed second at the Southwest Pacific regionals but came in fourth in the Pacific Coast sectionals, falling short of qualifying for nationals.

After winning the U.S. junior pairs title in 1972, McCladdie and Ewell decided to go pro; they toured with the Ice Capades. McCladdie skated with the show for only two years, but Ewell continued with it for 12 years. The Ice Capades had never had an African-American figure skating star until Ewell and McCladdie joined.