Say It Loud: “Black Power” Philosophy Explained By The Man Who Coined The Term 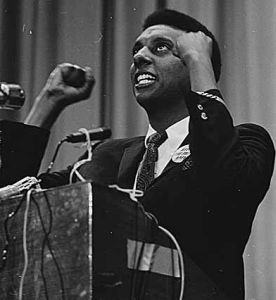 Soon after he was named chairman of the Student Non-Violent Coordinating Committee (SNCC), Stokely Carmichael began to tout the slogan and philosophy of Black Power.  In the speech below he explains  Black Power to an audience at the University of California, Berkeley.

It’s a privilege and an honor to be in the white intellectual ghetto of the West. This is a student conference, as it should be, held on a campus, and we’ll never be caught up in intellectual masturbation on the question of Black Power. That’s the function of the people who are advertisers but call themselves reporters. Incidentally, for my friends and members of the press, my self-appointed white critics, I was reading Mr. Bernard Shaw two days ago, and I came across a very important quote that I think is most apropos to you. He says, “All criticism is an autobiography.” Dig yourself. Ok.

The philosophers Camus and Sartre raise the question of whether or not a man can condemn himself. The black existentialist philosopher who is pragmatic, Frantz Fanon, answered the question. He said that man could not. Camus and Sartre don’t answer the question. We in SNCC tend to agree with Fanon–a man cannot condemn himself. If he did, he would then have to inflict punishment upon himself. An example is the Nazis. Any of the Nazi prisoners who, after he was caught and incarcerated, admitted that he committed crimes, that he killed all the many people he killed, had to commit suicide. The only ones able to stay alive were the ones who never admitted that they committed a crime against people–that is, the ones who rationalized that Jews were not human beings and deserved to be killed, or that they were only following orders. There’s another, more recent example provided by the officials and the population–the white population — of Neshoba County, Mississippi (that’s where Philadelphia is). They could not condemn Sheriff Rainey, his deputies, and the other fourteen men who killed three human beings. They could not because they elected Mr. Rainey to do precisely what he did; and condemning him would be condemning themselves.

In a much larger view, SNCC says that white America cannot condemn herself for her criminal acts against black America. So black people have done it–you stand condemned. The institutions that function in this country are clearly racist; they’re built upon racism. The questions to be dealt with then are: how can black people inside this country move? How can white people who say they’re not part of those institutions begin to move? And how then do we begin to clear away the obstacles that we have in this society, to make us live like human beings?

Several people have been upset because we’ve said that integration was irrelevant when initiated by blacks, and that in fact it was an insidious subterfuge for the maintenance of white supremacy. In the past six years or so, this country has been feeding us a “thalidomide drug of integration,” and some negroes have been walking down a dream street talking about sitting next to white people. That does not begin to solve the problem. We didn’t go to Mississippi to sit next to Ross Barnett (former governor of Mississippi), we did not go to sit next to Jim Clark (sheriff of Selma, Alabama), we went to get them out of our way. People ought to understand that; we were never fighting for the right to integrate, we were fighting against white supremacy. In order to understand white supremacy we must dismiss the fallacious notion that white people can give anybody his freedom. A man is born free. You may enslave a man after he is born free, and that is in fact what this country does. It enslaves blacks after they’re born. The only thing white people can do is stop denying black people their freedom.