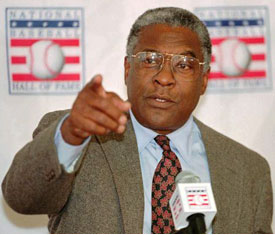 Bill White was named to become the first black president of the National League. The distinction also made the 55-year-old former baseball player and broadcaster the first black man to head any major league sports position.

William De Kova “Bill” White was born in Lakewood, Florida, on January 28, 1934. White began his career with the New York Giants in 1952 and spent several years as a major league player with stints on the St. Louis Cardinals and the Philadelphia Phillies.

As a minor-leaguer, White was the second black player to play for a Carolina League team – the Danville Leafs (1953). Percy Miller, Jr. had broken the color barrier for that league in 1951.

While playing for the Cardinals, White was given the opportunity to be featured in a sports program with KMOX radio in St. Louis. After he was traded to the Phillies, he was granted a program there, as well.

His playing career ended when White accepted a position as a sportscaster for WFIL-TV (now WPVI-TV) in Philadelphia. While in Philadelphia, White became the first African-American to broadcast National Hockey League games, when he called several games of the Philadelphia Flyers.

White was elected to replace Giamatti as the National League president in 1989 in a unanimous vote, becoming the first African-American to hold such a high executive position in sports. He served as the League’s president through 1994.

In 2011, White released his autobiography entitled Uppity: My Untold Story About the Games People Play.