Sol Butler: First African-American to Quarterback a Team for All Four Years of College

Sol Butler was a football player who was also known for his outstanding skills in track and field.

He was born in Kingfisher, Oklahoma, and was the youngest child of Ben and Mary Butler. His father was from Morgan County, Alabama, and born a slave in 1842; his mother was born in Georgia in 1867. His father fought in the Civil War and took the last name of Butler from General Butler whom he admired. His family eventually escaped slavery and settled in Wichita, Kansas, before eventually moving to Hutchinson, Kansas, in 1909.

In college, Butler quarterbacked the German College football team in 1916. He was also credited with averaging 25 yards per carry. During his freshman year, Butler led the college to a 13-7 win over St. Joseph College. He set seven school athletic records while collecting 186 medals. In all, he won 12 letters on various Dubuque University teams. Butler also found time to sing in the glee club and hold membership in the Philophnonia Literary Society. 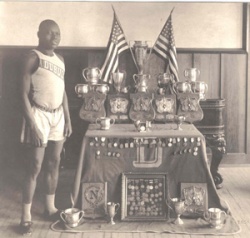 Butler later signed on with the NFL in 1923 with the Rock Island Independents. He received high rated reviews about his appearance and victory over the Chicago Bears. His contract from Rock Island was sold to the Hammond Eleven in November 1923 for the remainder of the season for $10,000. Butler played alongside Jim Thorpe of the Canton Bulldogs, during which he was named starting quarterback in 1926. Later that year, the New York Giants refused to let its all-white team on the field until Canton withdrew Butler as starting quarterback.

Butler later moved back to the Midwest and went on to work with youth as recreation director of Chicago’s Washington Park. He later married, but never had any children of his own. He eventually reopened Jack’s Cafe, which had been previously owned by heavyweight boxing champ Jack Johnson.

In 1954, Butler died while working in a Chicago tavern. He was shot to death by one of the patrons he had ejected from the nightclub.