2One of the most pernicious allegations made against the African-American people was that our slave ancestors were either exceptionally “docile” or “content and loyal,” thus explaining their purported failure to rebel extensively

So, did African-American slaves rebel? Of course they did. These are considered the five greatest slave rebellions in the United States.

1. Stono Rebellion, 1739. The Stono Rebellion was the largest slave revolt ever staged in the 13 colonies. On Sunday, Sept. 9, 1739, a day free of labor, about 20 slaves under the leadership of a man named Jemmy provided whites with a painful lesson on the African desire for liberty. Many members of the group were seasoned soldiers, either from the Yamasee War or from their experience in their homes in Angola, where they were captured and sold, and had been trained in the use of weapons.

They gathered at the Stono River and raided a warehouse-like store, Hutchenson’s, executing the white owners and placing their victims’ heads on the store’s front steps for all to see. They moved on to other houses in the area, killing the occupants and burning the structures, marching through the colony toward St. Augustine, Fla., where under Spanish law, they would be free.

As the march proceeded, not all slaves joined the insurrection; in fact, some hung back and actually helped hide their masters. But many were drawn to it, and the insurrectionists soon numbered about 100. They paraded down King’s Highway, according to sources, carrying banners and shouting, “Liberty!” — lukango in their native Kikongo, a word that would have expressed the English ideals embodied in liberty and, perhaps, salvation.

The slaves fought off the English for more than a week before the colonists rallied and killed most of the rebels, although some very likely reached Fort Mose. Even after Colonial forces crushed the Stono uprising, outbreaks occurred, including the very next year, when South Carolina executed at least 50 additional rebel slaves.

2. The New York City Conspiracy of 1741. With about 1,700 blacks living in a city of some 7,000 whites appearing determined to grind every person of African descent under their heel, some form of revenge seemed inevitable. In early 1741, Fort George in New York burned to the ground. Fires erupted elsewhere in the city — four in one day — and in New Jersey and on Long Island. Several white people claimed they had heard slaves bragging about setting the fires and threatening worse. They concluded that a revolt had been planned by secret black societies and gangs, inspired by a conspiracy of priests and their Catholic minions — white, black, brown, free and slave.

Certainly there were coherent ethnic groups who might have led a resistance, among them the Papa, from the Slave Coast near Whydah (Ouidah) in Benin; the Igbo, from the area around the Niger River; and the Malagasy, from Madagascar. Another identifiable and suspect group was known among the conspirators as the “Cuba People,” “negroes and mulattoes” captured in the early spring of 1740 in Cuba. They had probably been brought to New York from Havana, the greatest port of the Spanish West Indies and home to a free black population. Having been “free men in their own country,” they rightly felt unjustly enslaved in New York.

A 16-year-old Irish indentured servant, under arrest for theft, claimed knowledge of a plot by the city’s slaves — in league with a few whites — to kill white men, seize white women and incinerate the city. In the investigation that followed, 30 black men, two white men and two white women were executed. Seventy people of African descent were exiled to far-flung places like Newfoundland, Madeira, Saint-Domingue (which at independence from the French in 1804 was renamed Haiti) and Curaçao. Before the end of the summer of 1741, 17 blacks would be hanged and 13 more sent to the stake, becoming ghastly illuminations of white fears ignited by the institution of slavery they so zealously defended.

3. Gabriel’s Conspiracy, 1800. Born prophetically in 1776 on the Prosser plantation, just six miles north of Richmond, Va., and home (to use the term loosely) to 53 slaves, a slave named Gabriel would hatch a plot, with freedom as its goal, that was emblematic of the era in which he lived.

A skilled blacksmith who stood more than six feet tall and dressed in fine clothes when he was away from the forge, Gabriel cut an imposing figure. But what distinguished him more than his physical bearing was his ability to read and write: Only 5 percent of Southern slaves were literate.

Other slaves looked up to men like Gabriel, and Gabriel himself found inspiration in the French and Saint-Domingue revolutions of 1789. He imbibed the political fervor of the era and concluded, albeit erroneously, that Jeffersonian democratic ideology encompassed the interests of black slaves and white workingmen alike, who, united, could oppose the oppressive Federalist merchant class.

Spurred on by two liberty-minded French soldiers he met in a tavern, Gabriel began to formulate a plan, enlisting his brother Solomon and another servant on the Prosser plantation in his fight for freedom. Word quickly spread to Richmond, other nearby towns and plantations and well beyond to Petersburg and Norfolk, via free and enslaved blacks who worked the waterways. Gabriel took a tremendous risk in letting so many black people learn of his plans: It was necessary as a means of attracting supporters, but it also exposed him to the possibility of betrayal.

Regardless, Gabriel persevered, aiming to rally at least 1,000 slaves to his banner of “Death or Liberty,” an inversion of the famed cry of the slaveholding revolutionary Patrick Henry. With incredible daring — and naïveté — Gabriel determined to march to Richmond, take the armory and hold Gov. James Monroe hostage until the merchant class bent to the rebels’ demands of equal rights for all. He planned his uprising for August 30 and publicized it well.

But on that day, one of the worst thunderstorms in recent memory pummeled Virginia, washing away roads and making travel all but impossible. Undeterred, Gabriel believed that only a small band was necessary to carry out the plan. But many of his followers lost faith, and he was betrayed by a slave named Pharoah, who feared retribution if the plot failed.

The rebellion was barely under way when the state captured Gabriel and several co-conspirators. Twenty-five African Americans, worth about $9,000 or so — money that cash-strapped Virginia surely thought it could ill afford — were hanged together before Gabriel went to the gallows and was executed, alone. 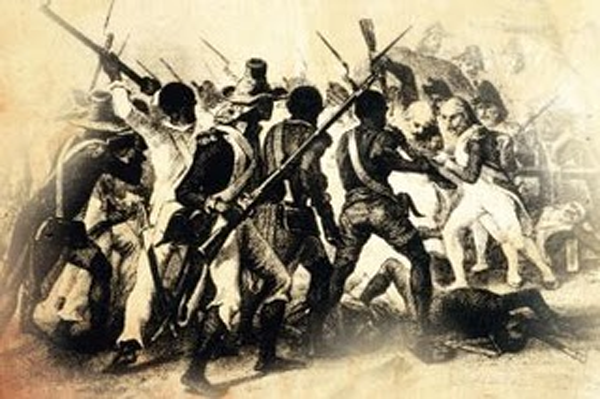 4. German Coast Uprising, 1811. If the Haitian Revolution between 1791 and 1804 — spearheaded by Touissant Louverture and fought and won by black slaves under the leadership of Jean-Jacques Dessalines — struck fear in the hearts of slave owners everywhere, it struck a loud and electrifying chord with African slaves in America.

In 1811, about 40 miles north of New Orleans, Charles Deslondes, a mulatto slave driver on the Andry sugar plantation in the German Coast area of Louisiana, took volatile inspiration from that victory seven years prior in Haiti. He would go on to lead what the young historian Daniel Rasmussen calls the largest and most sophisticated slave revolt in U.S. history in his book American Uprising. (The Stono Rebellion had been the largest slave revolt on these shores to this point, but that occurred in the colonies, before America won its independence from Great Britain.) After communicating his intentions to slaves on the Andry plantation and in nearby areas, on the rainy evening of Jan. 8, Deslondes and about 25 slaves rose up and attacked the plantation’s owner and family. They hacked to death one of the owner’s sons, but carelessly allowed the master to escape.

That was a tactical mistake to be sure, but Deslondes and his men had wisely chosen the well-outfitted Andry plantation — a warehouse for the local militia — as the place to begin their revolt. They ransacked the stores and seized uniforms, guns and ammunition. As they moved toward New Orleans, intending to capture the city, dozens more men and women joined the cause, singing Creole protest songs while pillaging plantations and murdering whites. Some estimated that the force ultimately swelled to 300, but it’s unlikely that Deslondes’ army exceeded 124.

The South Carolina congressman, slave master and Indian fighter Wade Hampton was assigned the task of suppressing the insurrection. With a combined force of about 30 regular U.S. Army soldiers and militia, it would take Hampton two days to stop the rebels. They fought a pitched battle that ended only when the slaves ran out of ammunition, about 20 miles from New Orleans. In the slaughter that followed, the slaves’ lack of military experience was evident: The whites suffered no casualties, but when the slaves surrendered, about 20 insurgents lay dead, another 50 became prisoners and the remainder fled into the swamps.

By the end of the month, whites had rounded up another 50 insurgents. In short order, about 100 survivors were summarily executed, their heads severed and placed along the road to New Orleans. As one planter noted, they looked “like crows sitting on long poles.” 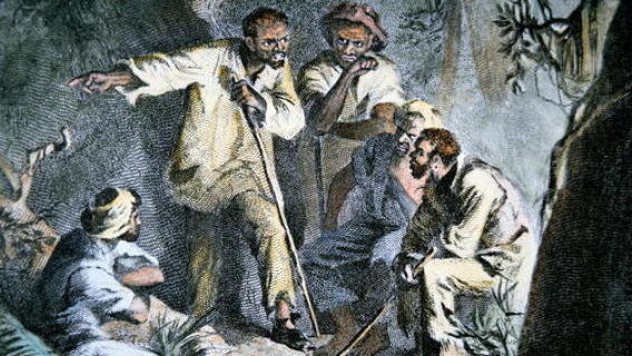 5. Nat Turner’s Rebellion, 1831. Born on Oct. 2, 1800, in Southampton County, Va., the week before Gabriel was hanged, Nat Turner impressed family and friends with an unusual sense of purpose, even as a child. Driven by prophetic visions and joined by a host of followers — but with no clear goals — on August 22, 1831, Turner and about 70 armed slaves and free blacks set off to slaughter the white neighbors who enslaved them.

In the early hours of the morning, they bludgeoned Turner’s master and his master’s wife and children with axes. By the end of the next day, the rebels had attacked about 15 homes and killed between 55 and 60 whites as they moved toward the religiously named county seat of Jerusalem, Va. Other slaves who had planned to join the rebellion suddenly turned against it after white militia began to attack Turner’s men, undoubtedly concluding that he was bound to fail. Most of the rebels were captured quickly, but Turner eluded authorities for more than a month.

On Sunday, Oct. 30, a local white man stumbled upon Turner’s hideout and seized him. A special Virginia court tried him on Nov. 5 and sentenced him to hang six days later. A barbaric scene followed his execution. Enraged whites took his body, skinned it, distributed parts as souvenirs and rendered his remains into grease. His head was removed and for a time sat in the biology department of Wooster College in Ohio. (In fact, it is likely that pieces of his body — including his skull and a purse made from his skin — have been preserved and are hidden in storage somewhere.)

Of his fellow rebels, 21 went to the gallows, and another 16 were sold away from the region. As the state reacted with harsher laws controlling black people, many free blacks fled Virginia for good. Turner remains a legendary figure, remembered for the bloody path he forged in his personal war against slavery, and for the grisly and garish way he was treated in death.

The heroism and sacrifices of these slave insurrectionists would be a prelude to the noble performance of some 200,000 black men who served so very courageously in the Civil War, the war that finally put an end to the evil institution that in 1860 chained some 3.9 million human beings to perpetual bondage.

« Previous PostWhy May is Such a Special Month for a Small Town's Tiny Black Population Next Post »Destrehan's Plantation Insurrection: A Major Slave Revolt Almost Forgotten