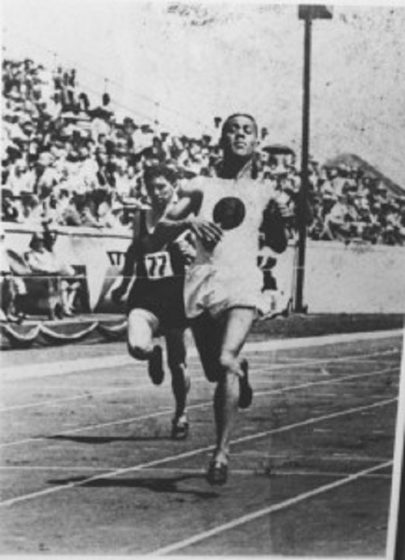 Lewis was nicknamed Rapid Ray for his speed on the track. He excelled in the 100, 200, 400 and 800 meter distances in high school and captured seventeen national high school championships (including a record four in one day) while a student at Hamilton’s Central Collegiate.

Lewis briefly attended Milwaukee’s Marquette University on a scholarship, but returned to Canada after only a semester. He found a position on the Canadian Pacific Railway (CPR) as a porter during the Great Depression, a job he would hold for 22 years. Lewis continued training – often running alongside the CPR train tracks during stopovers on the Canadian Prairies – and won a bronze medal as part of the 4×400 meter relay team at the 1932 Summer Olympics in Los Angeles, California. In the 400 meter event he was eliminated in the quarter-finals.

In 2002, Canadian author John Cooper wrote his biography, Rapid Ray: The Story of Ray Lewis. The children’s book chronicled his youth in Hamilton, as well as his training for the Olympics. A Hamilton school named in his honor, Ray Lewis Elementary, opened in 2005 and was occasionally visited by his widow Vivienne.