We would like to recognize the many accomplishments of noted computer scientist, mathematician and rocket scientist, Annie J. Easley. 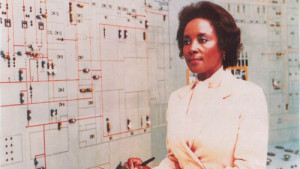 After graduating from high school, Ms. Annie J. Easley began her career in 1955 as a “human computer” for NASA’s predecessor, the National Advisory Committee for Aeronautics (NACA). At a time when machine calculation was limited to key-punched cards manually fed into enormous machines capable only of multiplication, addition, subtraction, and division, Ms. Easley was part of a team responsible for calculating (by hand, mind you) the complex mathematical functions needed by scientists (like logarithms, exponentials, and square roots).

While still employed by the NACA, Ms. Easley earned a Bachelor of Science in Mathematics from Cleveland State University in 1977. She also participated in continuing education and specialization programs specifically sponsored by the National Atmospheric and Space Administration (NASA).

During her 34 year career with NACA (and later, NASA), Ms. Easley is credited as being one of the first #African American women in the field of rocket science, mathematics, and computer sciences. She helped develop the software for the Centaur Rocket — a high-energy rocket that came to be known as ‘America’s Workhorse in Space”. She developed and implemented computer code that analyzed alternative power technologies for electric vehicles. She also studied technologies for wind and solar energies, as well as solving problems of energy monitoring and conservation. Some of Easley’s work helped lead the way to the development of batteries for modern Hybrid cars.

Easley’s work on the Centaur project helped develop the technological foundations for space shuttle launches, as well as launches of communication, military and weather satellites. Her work contributed to the 1997 flight to Saturn of the Cassini probe, which was launched by the Centaur.

Annie’s work helped make modern-day space flight possible — and for this, we salute her.